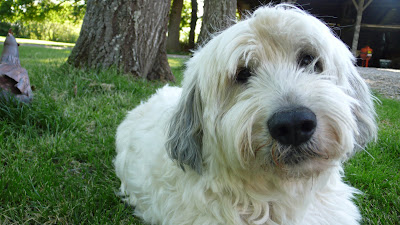 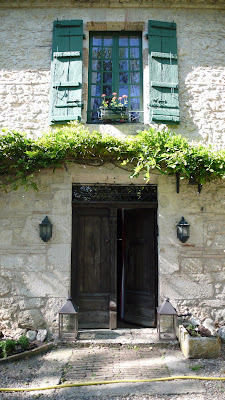 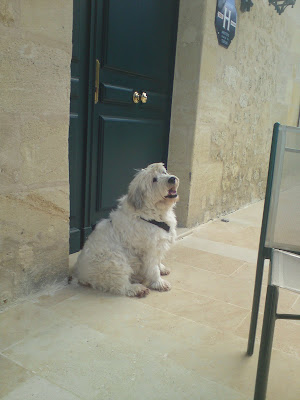 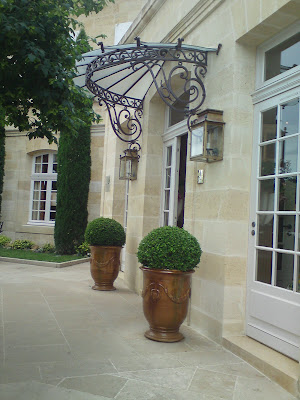 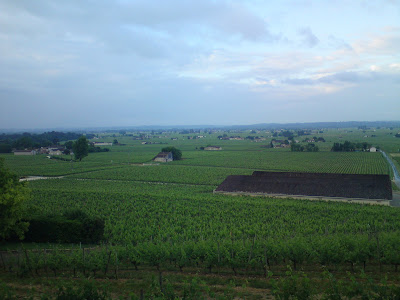 In his own inimitable way Wilf made it known that fancy hotels might be fine for a night or two but there is nowhere like home. Within two seconds of getting down from the back of the car he was careering round the garden like a puppy. A picture of pure canine joy. Soft toys were discovered, picked up and shaken ; starlings chased, and balls retrieved from those special hiding places under bushes. As he slumped exhausted in his spot in the kitchen, soft toy du jour in his mouth, there was an audible sigh of relief - "East, West .... "

First thing in the morning we'd gone for a long walk through the St.Emilion vineyards - some of the viticultural worlds most prized real estate. Wilf being a luddite at heart carefully and iconoclastically christened as many vines as he could. Russian oligarchs tasting the 2010 vintage may note a certain added piquancy . On the way back Wilf was prevented from visiting the two fancy vase d'Anduzes at the front door of the hotel - there is a decorous limit to how much christening a boy can do.

The shutters on the large rickety old farmhouse are painted a most dreadful dark green. The colour looks as though it had been used for a stage set of 'MASH' and then recycled to deepest France Profonde. Originally the woodwork on the house would have been left unpainted in the same, natural state as the front doors. However, over many generations they have acquired a patina of ever deeper, less arresting colour. To dip them in acid to remove the accumulated layers would damage, if not destroy, the underlying wood. The only alternatives seem to be either to have new shutters made or paint the existing eighteenth century ones with a new colour . Today Wilf and I shall venture into town to try to chose a new colour scheme - we have been told to look at 'taupe' whatever that is.

Plans are underway to start visiting Polish Lowland breeders. Thanks to those of you who recommended the Belgian and Dutch ones. Wee Alec or Wee Archie seem to have merged as the most likely candidates for names although Calvin reared its head on this mornings drive. Both kennels have litters due in July and are accredited by their national kennel clubs.