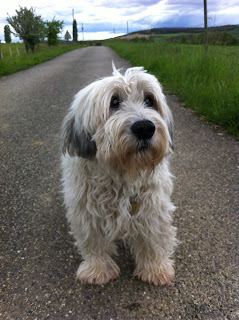 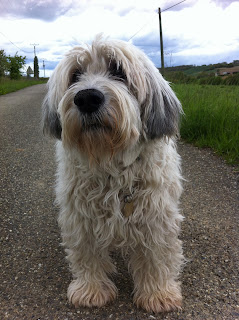 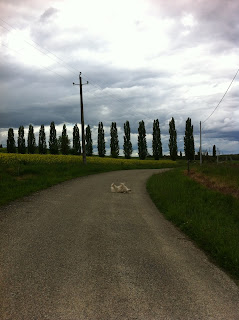 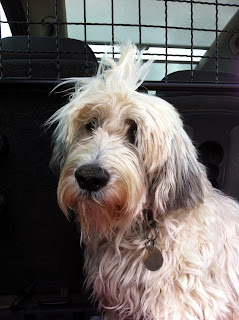 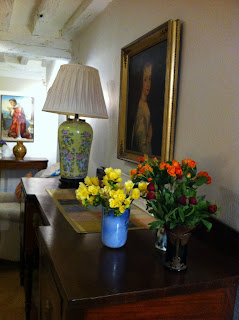 The second round of the Presidential elections. Seven thirty and there's already half a dozen tractors parked around the war memorial. Early rising farmers waiting to vote . At quarter to eight the mayor  arrives to open up the town hall. He looks flustered , trademark pork pie hat pushed back on his head . He can't find the front door key. A farmer lends him his mobile phone. Five minutes later Madame Mayor arrives in the very old Renault without hubcaps. She's brought the keys, a plate of honey croissants, and her eight year old granddaughter. The sleepy child still in pink pyjamas. On the dot of eight the blinds in the town hall are raised and the polling station officially opens. Madame Mayor offers the unwary a honey croissant .

In the afternoon a brief but violent hail storm blows down from the mountains. For a few minutes the house and village carpeted in an inch of sparkling  white. As the hail beats against the roof Wilf wanders into the library . He settles down across my feet . That look all dog owners know . '' Don't think I'm frightened. I've just come in to guard you " .

'The fonts' away . One of lifes inevitable duties . In the small hours Wilf wakes and lets out one loud howl . Not a bark, a howl . Three twenty exactly . I go downstairs by which time the phone is ringing . Coincidence?
Posted by Angus at Monday, May 07, 2012