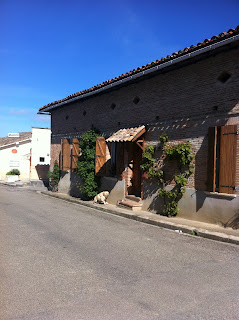 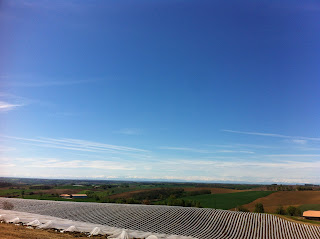 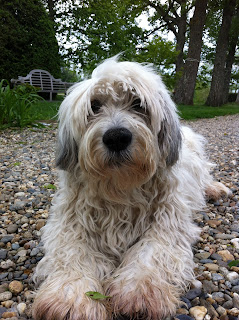 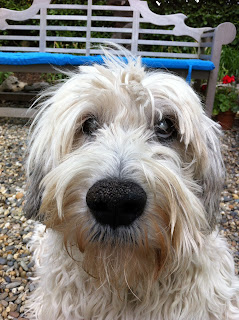 Summer has arrived . The melon farmers busy setting out row upon row of  plastic polytunnels . In the neighbouring village Oliver , the old labrador, can be found on the family doorstep , dreaming. Patiently waiting  , as he does every day , for his masters return . I wave at the old widow. She opens the window and waves back . Oliver gets up and moves into the shade.

Here on top of the ridge the arrival of good , but not too hot , weather marks the peak pilgrimage season. At first light thirty or so pensioners from St.Etienne walk briskly past the front gate. A chorus of bonjours.  The laughter of comfortable kinship. They're followed soon after by a Slovak accountant and his wife, also an accountant , on horseback . They stop at the church, dismount , and lift down a small fluffy dog. It too is going on pilgrimage. It's home for the journey a blanket lined wicker basket behind the wifes saddle. The small fluffy dog rushes over to christen the hedge around the war memorial . It flies across the grass , delighted with the humble scale of its adventure .

In the afternoon three Australian twenty somethings stop and ask for directions . They're following the escape route their pilot grandfather took after he was shot down in 1942. Almost seventy years to the day. The plan is to find a path across the top of the  Pyrenees and walk , as their grandfather did, into Spain . Angus wishes them good luck .  For a moment he toys with adding a middle aged  " you'll need it " . Then he thinks better of it . When you're twenty all things are possible . Grandad proved it .

Wilf spends his day asleep in the courtyard . He can't be bothered barking at the strangers wandering by , but from time to time he makes a half hearted growling noise . Just enough to let us know he's still guarding his flock and the house .
Posted by Angus at Saturday, May 05, 2012