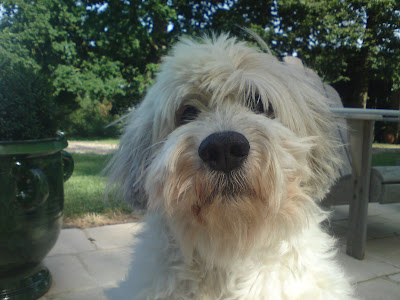 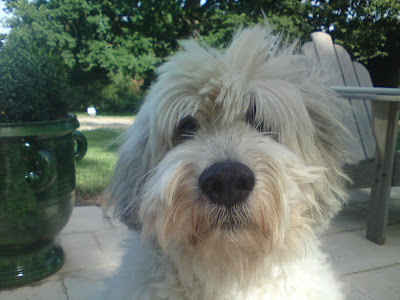 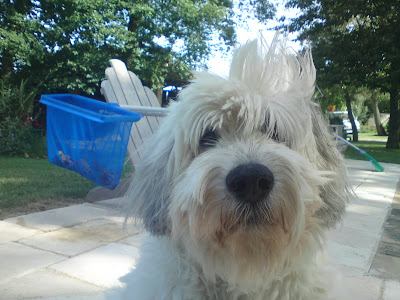 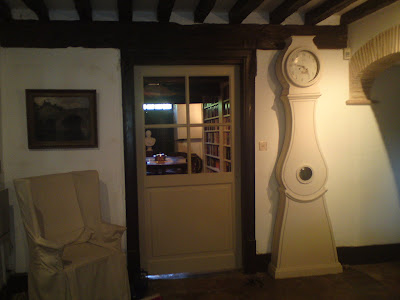 Progress on the rickety old farmhouse continues at a one step forwards two steps back pace. The joiners who fitted the new kitchen arrived, unexpectedly, yesterday morning with the long promised replacement doors. Five months late, but who's counting ? It seems that they are all off on their annual holidays next week so they wanted their account settled , in full. They seemed bemused by my suggestion that they might actually instal the panes of glass in the doors before they left. This morning 'the font' has come up with the cheerful news that the roof on the outbuilding that houses the swimming pool pump and filter has collapsed - termites have munched through the roof spars.

Wilf is delighted with the rickety old farmhouse. He has never lived anywhere which has enjoyed such a constant stream of visitors. I might ( in my politer and less frazzled moments ) call them plumbers, electricians, masons, joiners, gardeners but to him they are all possible bearers of edible goodies or ball throwing companions.

Two months on and Wilf is proving to be a perfect companion. In the absence of the bundle of anarchy that was his little brother he sails serenely and contentedly through the day. He trots beside us on his early morning walk , he settles quietly under tables in restaurants, he waits patiently in the doorway of the baker and butcher. 'The font' is thoroughly enjoying this well mannered lifestyle . I must admit to missing the frenetic, lead tangling, routine disrupting, you go right I'll go left, lunacy of two dogs.

Some of you asked about the link between Condoleezza Rice and Aretha Franklin. Later this month they will be performing together at a concert in Philadelphia in aid of their favourite charities. Ms.Rice is a very accomplished pianist who regularly played for the Queen at Buckingham Palace. Quite a renaissance woman: Provost of Stanford, Secretary of State, and a concert pianist in her spare time. How do these people manage to do it?.