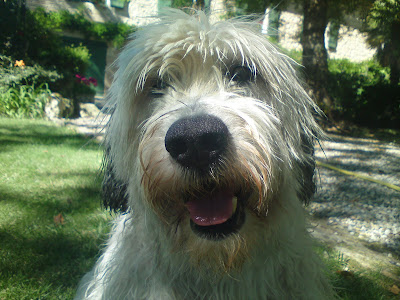 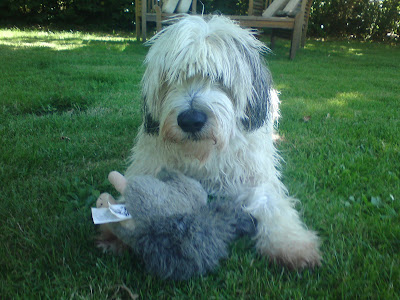 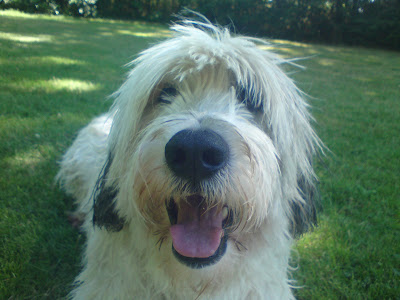 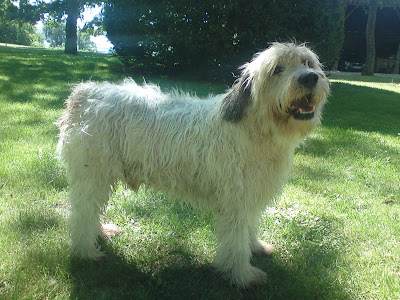 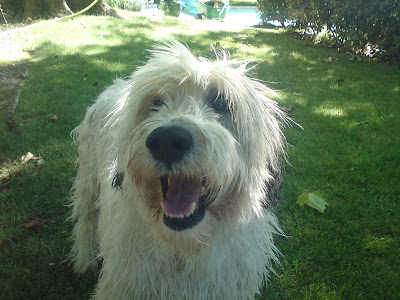 The summer heat is on its way. It's supposed to get close to 40 today so Wilf will be spending much of his time asleep indoors on the cool tiled floors. Yesterday, as the sun was setting we turned on the garden sprinklers and he cavorted around under the refreshing spray like a three month old puppy. He, and his toy squirrel, soon got soaked to the skin charging from one sprinkler to the next and then back again. Wilf clearly hasn't figured out that water is involved in this game . This morning a smell of damp senior dog can be detected in the house.

Had been putting off going to the dentist to have a filling for over a year. 'The font' , who has no sense of prevarication, finally resolved matters by phoning up the surgery and arranging for an appointment on Monday afternoon. This was the same day I was due to talk to a group of American bankers in the evening so the logistics seemed to work well. The filling was at 5.30 and the speech was at 9.00 - plenty of time to let the anaesthetic wear off, shower, change and relax before rushing out again. Got back to the room in the hotel at 6.45 to check the invitation. Horror of horrors being an American group from Charlotte, dinner was at the decidedly un-European time of 7.00 pm . Worse - the accompanying letter ( who ever reads accompanying letters ? ) suggested that the talk and questions take place during, not after, dinner. One good thing - Amir's new '25 to life' style hair cut didn't need much drying. From shower to dinner took ten minutes max. Whatever prompted me to mention Condoleezza Rice and Aretha Franklin in my opening remarks? As I heard it coming out as 'Condohleethah Wythhh an Weetha Fwankwin' the reasons for not having a jaw numbing filling an hour before an early evening dinner talk became obvious.