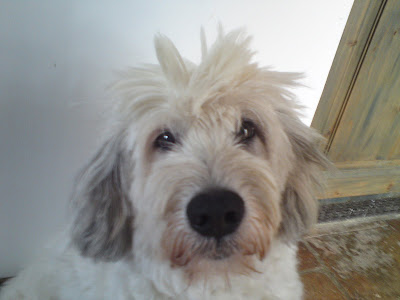 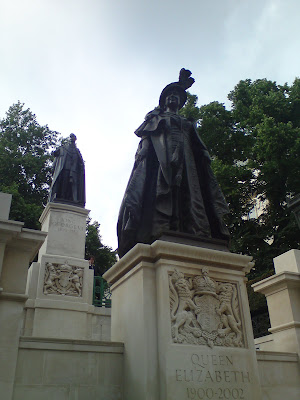 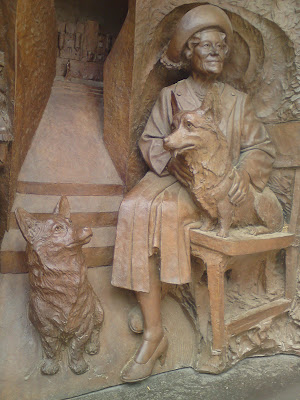 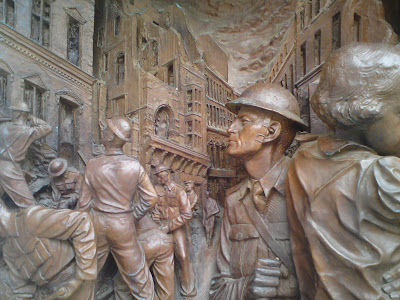 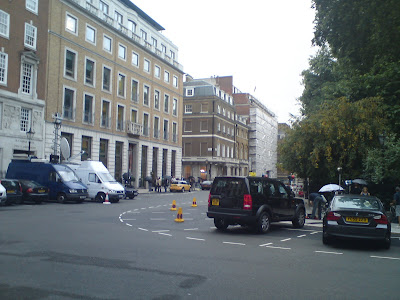 Back from a night away in a very hot and humid London to be greeted by an extremely enthusiastic 'welcome home' lick from Wilf. As we went on our late evening meander across the village green a swarm of thirty or of forty darting bats, flitting which and every way,swept around us. Wilf was entirely oblivious to their presence even though they were within inches of his face. I really must have his eyesight tested. To see bats in family groups of three or four is quite usual but in numbers like this? 'The font' thinks that rather than be called a swarm or a flock they should be called a belfry of bats.

London is a place of statues. When you live there they are street furniture, omnipresent, taken for granted and quite invisible . However, walking along the Mall late on Monday afternoon I stopped in front of a rather anodyne statue of the Queen Mother - quite unspecatacular in it's faux flummery . Behind it , hidden by the steps leading up to Carlton Gardens is a bronze frieze showing the highlights of her life. The scene of her with two Corgis outside her home in Scotland and the stoic panel showing a blitz damaged London capture a much more intimate and personal side. Vivacity in bronze.

My route to dinner took me past the headquarters of the troubled oil giant BP. There were masses of press camped outside with their satellite dishes waiting to report back on the impending management changes. Something slightly illicit and thrilling about taking a photo of the unsuspecting paparazzi . A touch of their own medicine?

Sat outside with Wilf late into the night finishing off a rather attractive bottle of rose. The great imponderables of life. Why after spending a fortune on pre-med education would anyone view a job as a door opener at Abercrombie and Fitch as a 'thumping' summer vacation job? Wilf sighed and gave me a sage look that said everything you need to know about twenty year old male psychology - 'Chicks !'. He may well be right.
Posted by Angus at Tuesday, July 27, 2010