The mayor, the farmer and the mechanical digger. 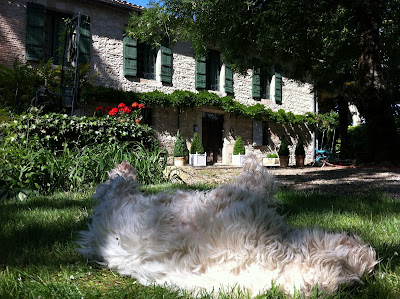 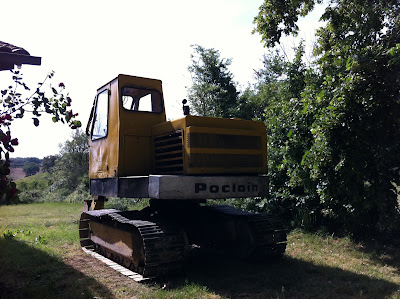 Wilf heard it first . A distant , grinding , clink-clank clink-clank sound echoing from the far end of the lane . By the time ' the font ' joined us at the garden gate to see what was happening the cause of this Friday evening brouhaha was apparent . The mayor and the old farmer were jointly coaxing a large , very ancient , bright yellow mechanical digger towards the village. As neither of them has a fully functioning right arm this was an unnecessarily complicated procedure that required the mayor to hang out of the cab and steer while the old farmer changed gear . Neither , one would have to admit, was a natural left hander . On their third attempt the battered mechanical device - a Poclain - made an abrupt right angled turn into the old farmers courtyard where it coughed and stalled . There it sits . A combination of beached whale and one of those dinsoaur skeletons you see in natural history museums . " There goes the neighbourhood " said ' the font ' demonstrating that wry Swedish humour that is famous round the world . We would have asked what the machine was going to be used for but both farmer and mayor disappeared , conspiratorially , into the adjoining garage before we had a chance to quiz them.
Wilf dealt with this noisy new arrival by wandering across the lane and promptly christening the behemoths tracks. He then came back into the garden and fell sound asleep on his back on the grass . A contented look on his face that said " What we see depends mainly on what we look for " .
Posted by Angus at Saturday, May 21, 2011