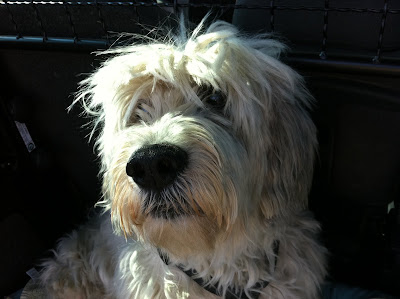 No workmen, no visitors, no family, no noise. Just Wilf, 'the font' and yours truly. Oh, and for a couple of hours Loic, the bifocaled gardener, who came along to dig up the bulbs I'd recently planted. An unintended consequence of asking him to do some weeding. In the supermarket the sudden appearance of rack upon rack of Lily of the Valley all packaged up and priced at €3.60 a stem. Must be a French thing.

Six in the evening and we set off on Wilfs early evening walk. While the family fellow sniffs around in the flower beds, we sit on a bench in the shade of the chesnut tree. I'm wearing my gardening outfit. A fishing hat, a pair of blue Abercrombie and Fitch cargo pants and a sweat shirt that says Stanford Rugby. Items definitely designed for a younger generation but saved from being prematurely discarded by the cost centres. Despite their snugness no point in throwing out perfectly good clothing. ' The font ' is rather more upmarket and sporting a broad brimmed sun hat . " Just as well no one can see us sitting here looking like two dotty ninety year olds " says ' the font ' . At that very moment the bad tempered villager who dislikes foreigners drives past in his new Renault Scenic. We giggle. Then the mayor passes in his ancient Peugeot. We giggle again. And so for twenty minutes the usually deserted lane sees vehicle after vehicle roll by - a rural Champs Elysees. The French view of foreign eccentricity now confirmed by the sight of two uproarious tramps waving at them while chatting away to an inverted miniature polar bear at their feet. ' Les Anglais ! '. Through it all Wilf lies on his back in the shade , listening to the hilarity, snoring gently and passing the occassional hint of ' L'Air du Wilf '. Laughter , the sounds of frogs on the pond, the scent of lime and elderflower and the presence of an old blind dog. Not the chicest of French lifestyles, not the most exciting of blog posts but simple contentment nonetheless.