Reappearance of a different sort. 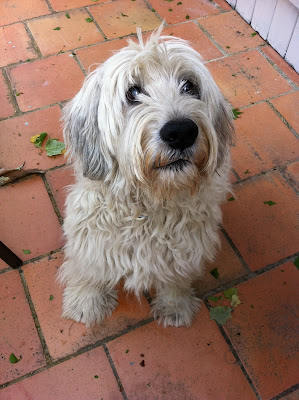 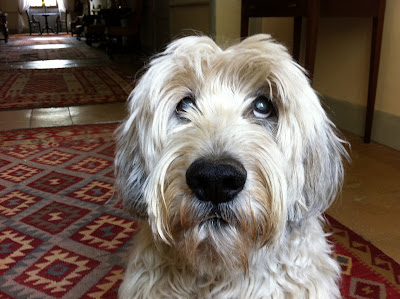 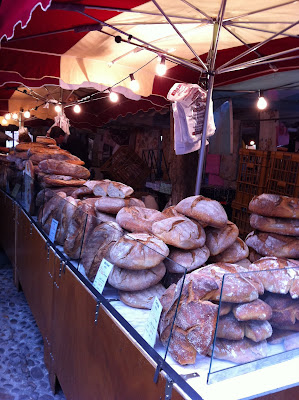 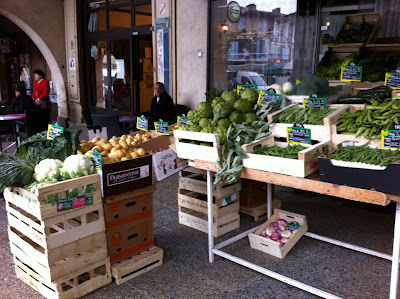 The artisinal baker has set up a stall under the arches in front of the cafe. In Scotland bread buying was a mundane experience. Here it's a journey into a wonderland of different shapes, sizes, textures and grains. The baker chats with Wilf and cuts off a tiny sliver of rye bread from the end of an enormous loaf that looks as if it could feed twenty. Wilf devours it there and then with lip smacking, unselfconcious, enjoyment. On the other side of the cafe a stall selling the freshest of new potatoes. Picked that morning. Home to find that the portly electrician had returned and was working away in the attic as if nothing had happened. Maybe displays of ' emotion ' are a particularly French thing. Neither the blue coated workmen or the chain smoking plumber seemed to be either surprised nor alarmed by his reappearance.

Reappearance of a different sort just before lunch . ' The font ' and yours truly were happily sequestered in the downstairs kitchen watching the wedding on the tiny television. I had just got a bottle of champagne out of the fridge in readiness to toast the young couple, when the bell rang. It was the mayor and two of the over sexed ladies from the Friday morning arts class in the Salle de Fetes. " Are you watching the wedding on television ?" . After eighteen months in our little village even Angus knows that this is French shorthand for ' can we come in and have a glass of champagne ? '. So it was that the royal couple were wished all the best by a group of French fifty something ladies ( another five of them had laid down their brushes and mysteriously appeared in the kitchen ) , the mayor of our little commune and his wife with the whistling hearing aid, two workmen in blue coats, a portly electrician and a plumber who , for once , was not smoking. Oh, not to forget the buxom young lady from DHL who amidst all this festivating delivered a parcel from Libertys. She stayed just long enough to wish everyone a ' bon mariage ', enjoy a slice of hastily warmed up quiche lorraine and do justice to a glass of Gosset Celebris Extra Brut . Wilf, who thrives on attention and dropped quiche, is hoping that this will become a daily occurence.