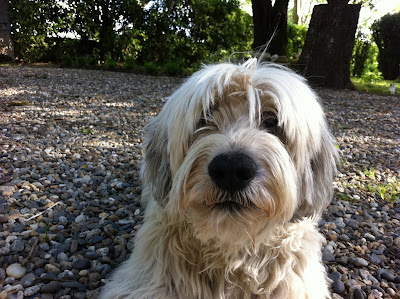 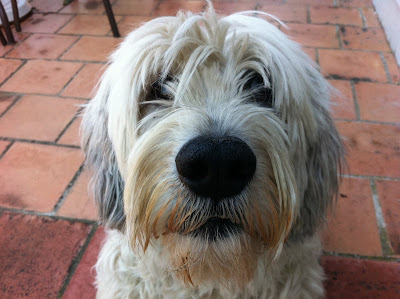 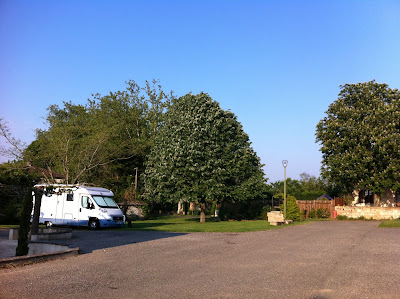 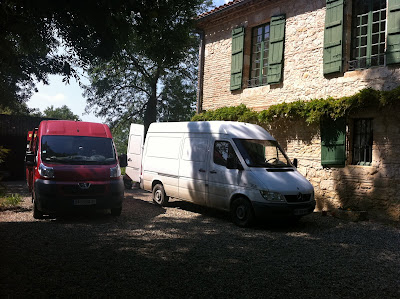 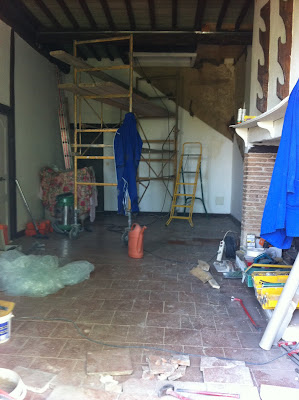 A humdinger of a row between the blue coated workmen and the overweight electrician. The blue coated workmen asked the electrician to redo some wiring in the attic . He said it was just fine the way it was . They said it wasn't. He asked them what they knew about wiring. They said enough to know when it's was botched . And so it escalated from there. After five minutes of ever louder shouting and ever more agitated arm waving the portly electrician left. Being French he didn't just go. He slammed the door of his red van, raced the engine, shouted something really rather impolite and then hurtled down the drive narrowly missing the gate piers and sending gravel scattering in every direction . ' The font ' looked at me and said " I suppose that means we'll have to find someone else to wire up the lights ".

A motor home has been parked on the village green for the last two nights. The owners get up around ten, set out a table and two chairs and sit down under a flowering tamarisk to enjoy breakfast. They then go through the same routine at lunch and dinner time. Last night they brought out a primus stove and fried liver in a large pan. An action which immediately attracted Wilfs attention and required a detour on our evening walk . They're still there this morning. How bizarre. The village might be pretty but would you really want to sit on a folding chair and look at it for three days ?.

In the absence of an electrician we shan't be watching the wedding on the wide screen television upstairs. Instead we shall be forced into following events on the small screen in the kitchen below. As the trumpets march up the stave and the choir readies itself to sing the words of the opening hymn , ' I was glad when they said unto me ', the champagne will be brought out of the fridge in readiness for a toast . Wilf will get half a croissant.