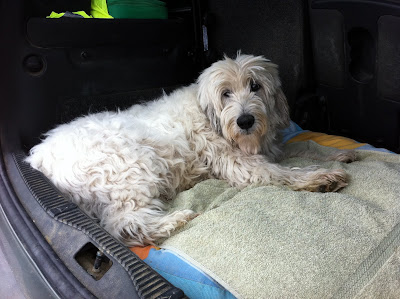 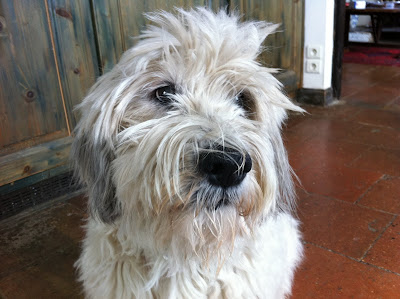 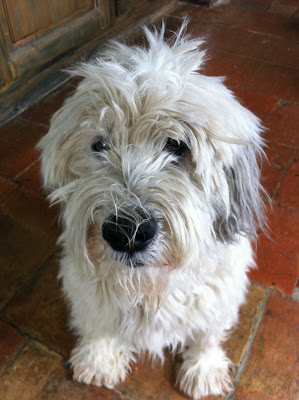 You'd think that a dog would be at his most confused in the first weeks of blindness. It doesn't seem to work like that. Here we are in week three and only now is his total dependence on us becoming clear. It's as if he's forgetting his visual map of the house and garden without having put in place a new map based on scent and feel.

Both Wilf and his family are learning new ground rules. So far the four cardinal rules seem to be :

Chatter away all the time. The sound of familiar voices seems to relax him. Maybe its because our voices let him know where we are or maybe they simply provide comfort that he doesn't have to face the world alone. Who cares if people think we're lunatics as we burble happily away ?

Time spent on commands like ' stop , stay, up, down and go ' make everyones life much easier. Of these 'stop' is the most important. If a blind dog can walk into something he will. If the blind dog happens to be Wilf he'll run into it, repeatedly.

Adventures are vital . Wilf finds it difficult navigating the twenty or so yards across the field down to the stream but when he gets there he loves it. Over the last few weeks we've learnt that depression in dogs does exist . There's nothing like fresh scents and textures to brighten up a dogs day. Where we go, he goes. Thankfully, he loves the back of the old Volkswagen with its familiar smells and textures so having him tag along for adventures is no problem.

Use a short lead and harness for walks. Even if its only across to the fire hydrant or the village green. He feels much more comfortable knowing that there is someone there keeping an eye out for threats and dangers. The second he's let off the lead he freezes.

Wilfs ' there's no failure except in no longer trying ' attitude to life makes this next stage of the journey much easier.