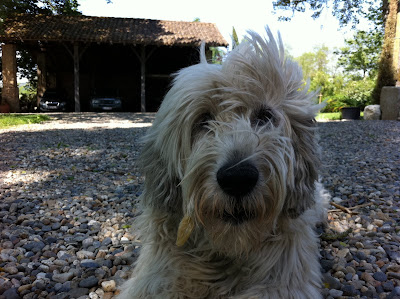 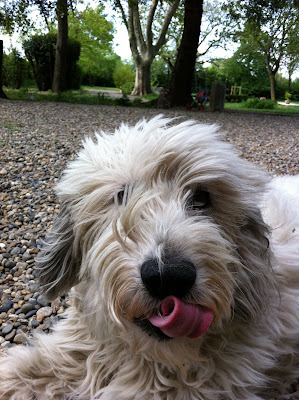 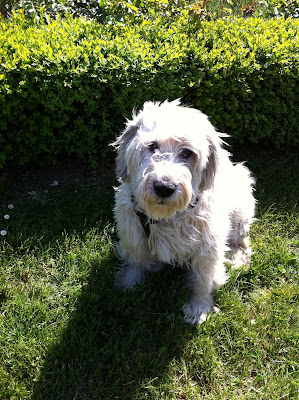 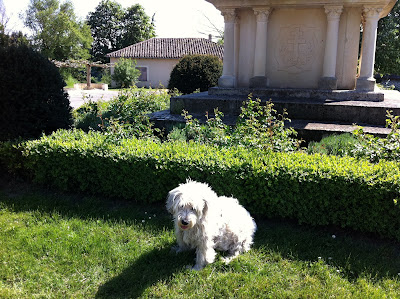 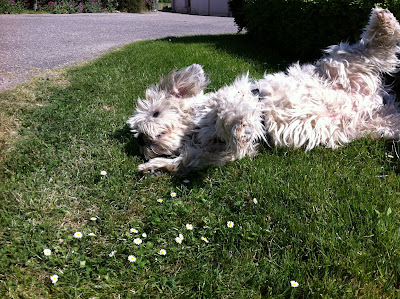 Sunday night Wilf was up for a pit stop at one, three thirty and then five. Last night he slept through uninterruptedly until six. Same routine, same food, same everything. The secret of controlling diabetes in dogs remains elusive. This morning he's just happy to roll on his back on the grass by the war memorial. Simple pleasures.

Real south west weather. A young Belgian couple set up a picnic on the village green. Stunningly beautiful young mother, trendy father, a new born, and a three year old. No sooner is everything laid out than a thunderstorm breaks overhead. From clear skies to torrential downpour in under five minutes. Screaming children, distraught parents. Welcome to Tarn et Garonne. ' The font ' runs across the lane and invites them to come over and enjoy their picnic under the shelter of the terrace. He a lawyer in Brussels. She a doctor on maternity leave. They're on pilgrimage to Compostella to ' remind themselves that there's more to life than work '. No pretentiousness. No proselytizing. Nice folk. Exceptions to the rule that people who want to share their religious views with you almost never want you to share yours with them . After Digbys experience I'll always have a soft spot for pilgrims who wander past even if I don't understand them.

Formatting on blogger becoming more and more difficult. Gaps between photos and paragraphs set, then reset. Still they come out all over the place. It's been going on for two weeks now. This gremlin proving mighty difficult to shift.