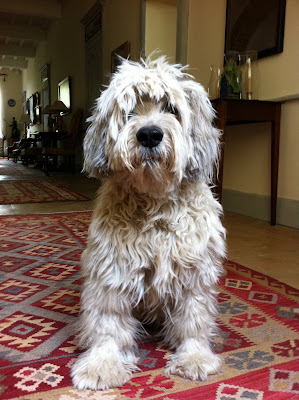 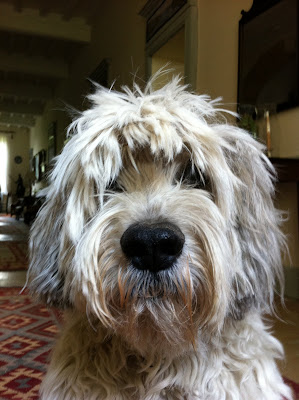 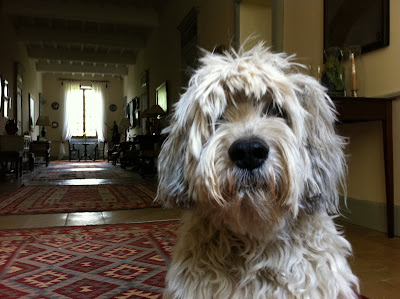 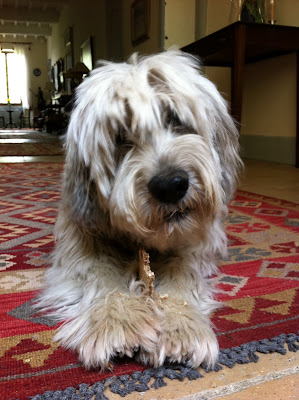 Wilf spends much of Wednesday in the upper hallway munching on Ryvitas. From here he can monitor the comings and goings of the blue coated builders, the overweight electrician, the chain smoking plumber and the mad French curtain woman. A combination of characters that would test anyones sanity to the limit. The mayor chooses this particularly inapposite moment to pop in , unannounced, for a chat about the church clock. As we climb the stairs to the drawing room ( only the best for monsieur le maire ) Wilf barks, the plumber swears, the electrician breaks a pane of glass and the mad French curtain woman decides to sing atonaly. Bedlam. Pure bedlam. It goes without saying that ' the font ' has gone off in the car leaving yours truly to deal with this cast of miscreants.

The good news is that the mayor has had an acceptable quote for repairing the church clock. The bad news is that he and the Floral Village committee want it replaced by a modern, electric, silent , definitely non-chiming system. The Beautiful Byeways committee are equally adamant that the old mechanical , chime thirteen times on the hour, every hour, twice, mechanism must be replaced. " Perhaps M'Ongoose you could come to the next town council meeting to give your advice ? ". I said that I would be delighted to do so if I wasn't travelling at the time . The reality is I'd prefer to stick my head in a gas oven than get involved in a dispute between these two mutually loathing groups of villagers.