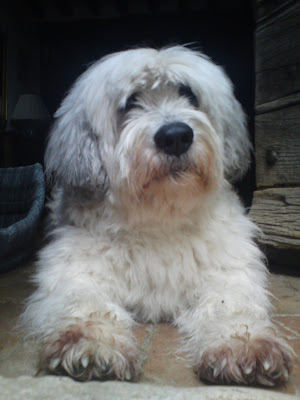 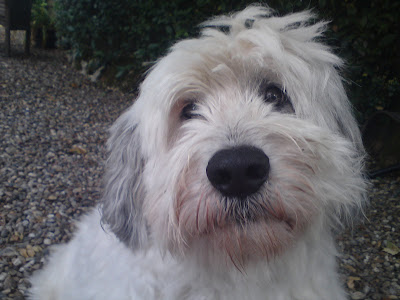 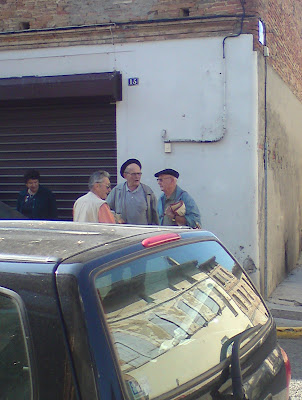 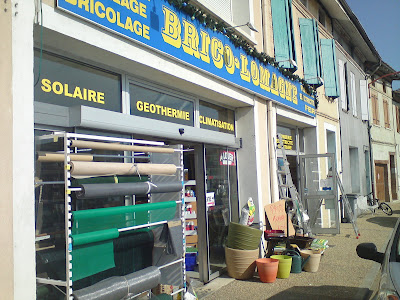 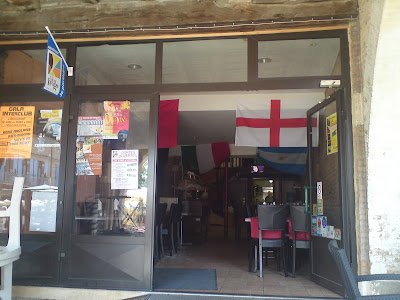 Up bright and early for a break of day walk with Wilf. Turned on the shower and nothing happened. Well, that's not quite true - there was a momentary hiss and then nothing. The plumbing, or what passes for it, in the rickety old farmhouse has chosen this morning to show its age. A six o'clock message on the plumbers answer machine - tried not to sound desperate.

After our walk around the light industrial park Wilf and yours truly headed to the cafe in the square for our morning constitutional. Noted that the restaurant next door is all set up for the World Cup with large French, Italian , Argentine and English flags suspended from the ceiling. Wilf settled down under the table with a bowl of water brought to him by the waitress - receiving his first hair tousle of the day in the process. " Bonjour Veelfee". I sat there unshaved and stubly wearing a baseball cap to hide my 'celtic' hair - the grunge look blending in perfectly with the pre-breakfast beer and absinthe drinkers. Is this how one takes the first step on the slippery slope ?

Past the early beret wearing baguette buyers to the hardware store for some insect repellant. Madame Bay has discovered that we have an infestation of ants in the downstairs corrdior. They compliment the infestation of strange wood munching insects that have zestfully started work on the terrace and the large swarm of bees that have taken up residence in the gutter outside the bedroom window. At seven in the morning my French is simply not up to describing the various plagues and pestilences that have descended on us so I revert to gesturing and making bee like sounds. The woman behind the counter just looks at this unwashed figure flapping his arms and buzzing and weighs up whether to call the gendarmes.

A lot of you have written to say your comments aren't appearing on the blog. Apologies but it's nothing to do with us. I've noticed that some of my comments on other blogs seem to disappear. Must be one of those google gremlins.