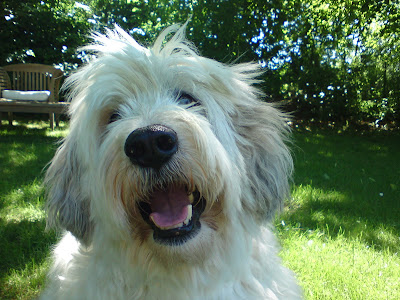 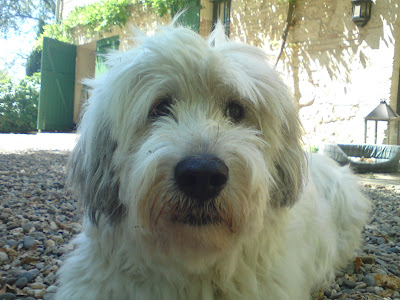 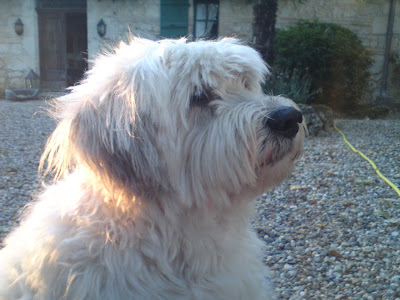 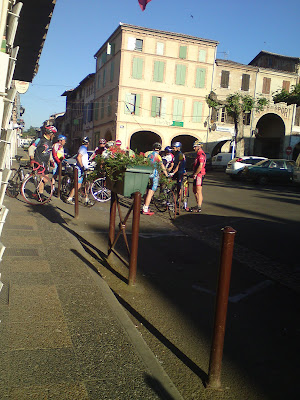 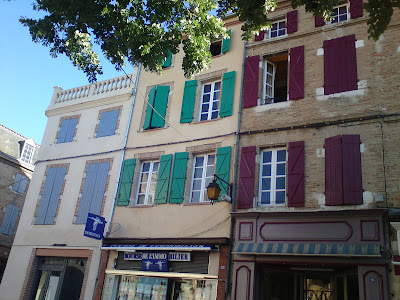 Off bright and early with Wilf in the car for the breakfast croissants - hot and straight from the bakers oven. One of lifes simple but peerless pleasures. At six in the morning the town was deserted apart from a group of gentlemen cyclists of a 'certain age' who were milling outside the newsagents. Most of the cyclists stood amiably chatting to each other in the early morning sun but five or six hyperactive individuals performed endless circles between the kerb and the market hall. Whenever a car came past they scattered like startled lycra clad seagulls. We watched this contrast in activity from the comfort of the cafe, Wilf and his bowl of water from beneath the table , me at the bar, until the arrival of the early morning beer and absinthe drinkers focused our minds on the day ahead. On the way back to the car the shutters on the square were looking very 'provencal'. Perhaps we should be braver and ditch the taupe and choose a brighter colour for the house ?

A good day for Wilf. Yves, Ross his wild haired Irish sidekick, and the morose lad in the blue bib overalls came to finish the library and the decking. This is the third time they've been to 'finish' the library and true to form within an hour they disappeared to cut another strip of wood for the cornicing. 'Back in a minute'. Their disappearance coincided with lunchtime and I can only assume that it was pressure of work that prevented them from showing up again later in the day. None of this bothered Wilf because Ross spent much of the morning slipping him illicit Garibaldi biscuits. Garibaldi biscuits don't rank as highly in the pantheon of illicit treats as Jaffa Cakes but they are illicit and therefore not to be refused.

At lunchtime 'the font' took Wilf down to the vet for his annual check-up. He's fine. No after effects from his run in with the processionary caterpillars and the lump on his head is benign. A discussion about whether to vaccinate him against piroplasmosis . The vet , who is currently vaccinating 15 dogs a day, thinks that the treatment is only 60% effective, requires 3 separate sets of injections spread over a couple of weeks before it becomes effective , and then only works well on young dogs. He is convinced that Avantix is the best repellant together with a tick collar - which on long haired dogs must be kept close to the skin - ie the hair must be kept trimmed short around the neck. Unfortunately, Wilf has a severe reaction to something in Avantix so we'll stick with Frontline but spray it on rather than use the treatment that goes between the shoulder blades.

A follow up meeting to be held in the church at ten this morning. We have 84 chairs in the village church and 200 seats pre-reserved ( if the mayors wife mental arithmetic is correct). Panic time. Full details tomorrow.