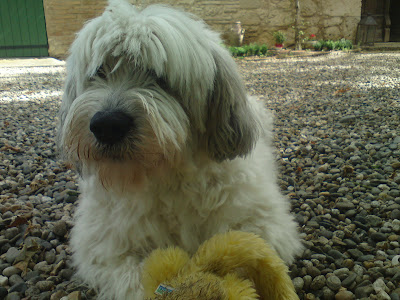 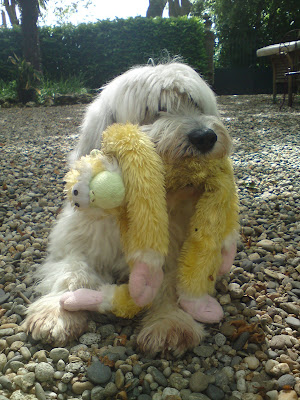 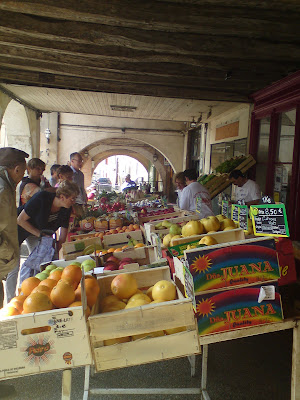 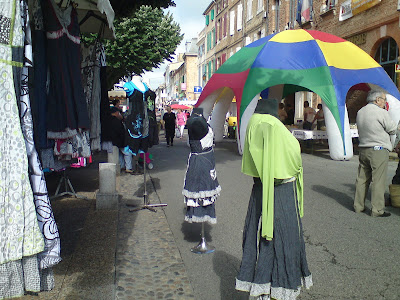 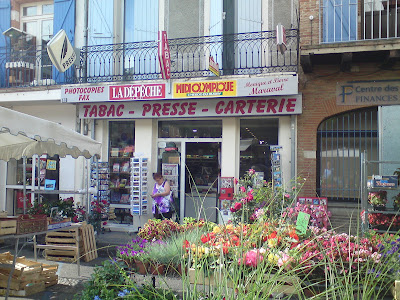 The entire population of the village gathered on the green outside the church to watch the first match of the French team in the World Cup. After much waving of hands , testing and retesting of electrical connections and some decidedly unsporting language the mayor finally managed to nurse the widescreen tv into life. For ten minutes there was a party spirit as the less conservative members amongst us performed an impromptu conga to the ever present sound of the French World Cup song - Allez, Ola, Ole . Google it, once you've heard its manic rhythm you'll start singing the lyrics in your sleep .

Then at 8.30 pm just as the referee blew the starting whistle the skies opened and a gargantuan co-joined rain and hail storm swept down from the Pyrenees and sent everyone scurrying for cover. Sadly, no World Cup recipes from our conga leading Madame Bay this morning.

Today dawned bright and fair so off with Wilf to the light industrial park and the Saturday morning market. The first of the seasons local melons were on the greengrocers stall and were added to the list alongside peaches, strawberries and white asparagus. Our fruit buying completed - 'au revoir Veelfie'- we moved onto the newsagent for the morning paper. En route we passed a clothing stall fronted by a display of mannequins. With their dangly sleeves and billowing skirts these naturally attracted Wilfs undivided attention .Only a timely and judicious intervention by yours truly saved the pedestals from his early morning christening routine.

This afternoon there is a World Cup gala in the next village along the road. We shall go and post pictures of the revelry tomorrow. Max in South Africa I promise you we won't let you down - deepest France profonde is getting into the swing of things .We might not be able to match the party spirit in Africa but we'll certainly try.