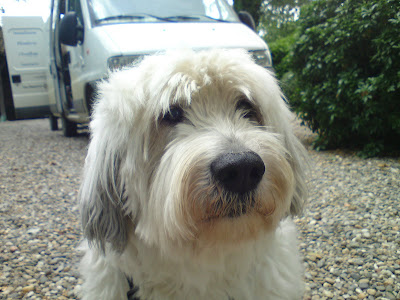 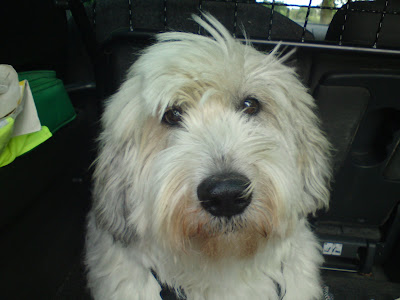 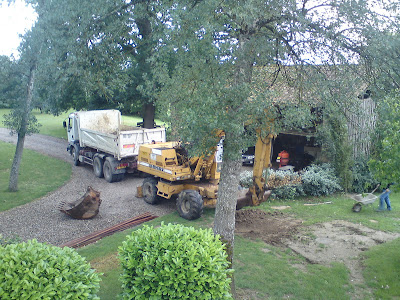 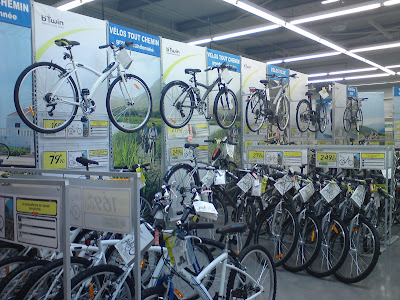 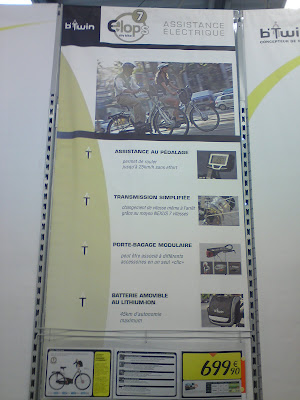 A glorious day for Wilf. Not only was there a yellow digger with huge tyres for him to christen but he was stage centre from eight in the morning until seven at night. Italian workmen tended to ignore him but here in France he gets spoken to as if he's part of the team. Whenever a problem develops he'll saunter over, sniff the air, and settle down to supervise what's going on. The plumber has christened him 'le contremaitre' or foreman. Mark you not many foremen get their hair tousled , ears ruffled or balls thrown for them as much as this one. The only negative on the day - no Jaffa Cakes.

To enable the library builders, hole fillers, leak repairers and other unexpected arrivals to get on with their jobs without being constantly uninterrupted Wilf was loaded in the back of the car and taken off for a forty minute drive to the local shopping mall. The sports store was the first port of call as ' the font' believes that we should buy bikes to maintain my cardio-vascular health . Thankfully, the array of bikes was enormous and the choice has been put off until the powers that be decide whether we need an off road, on road, extreme off road, high comfort, or nine gear model. Whatever happened to the days of just buying a bike ? I noticed that there was a model with something called assistance electrique . Closer examination showed that it benefitted from a battery driven motor that helps you get up hills. The batteries keep their charge for 25 kilometres - a pretty healthy bike ride by anyones standards. My suggestion that we buy two of these was vetoed on health grounds. Still sounds the healthiest option to me. By the way what is it with cycle helmets ? If anyone thinks I'm going to venture out on public roads wearing a super-reflective metallic day-glo yellow number they can think again ! Wilf noted with interest that the store also sold little carts that attach to the rear of the bike frame and enable you to cycle along with the family pooch in the 'granny' position close behind.