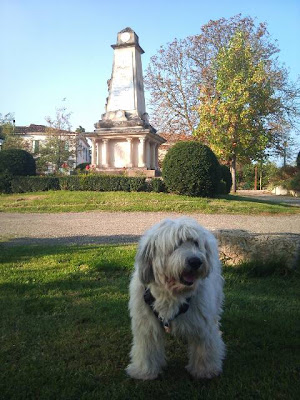 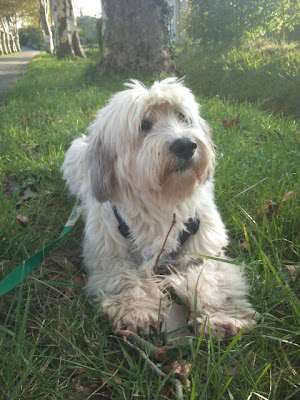 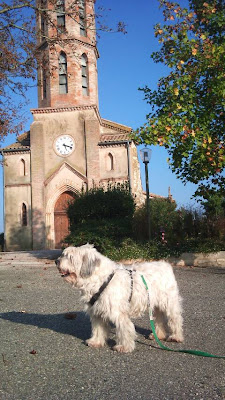 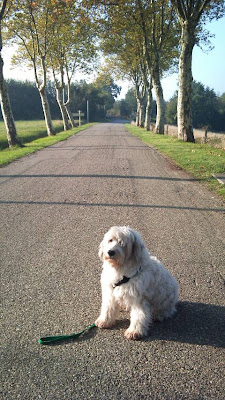 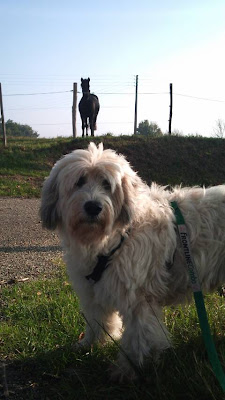 At seven last night the mobile discotheque sprang into life sending the sound of Tequila Boom Boom through the village at 140 beats a minute. We wandered over with Wilf at nine for a glass of wine and the prize ceremony for the most ' floral house '. As we crossed the green Madame Bay could be seen dancing happily in the middle of the petanque court. She was wearing what appeared to be an alpine hunting hat complete with pheasant feathers and a deep purple velvetine, diva style, evening gown. Imagine Jesse Norman onstage at the Met doing the chicken dance and you're three quarters of the way there.

" Wilfeee ! ". 'The font ' and I were treated as mere appendages as the family fellow became the centre of the saintly septaguenarians attention. The long suffering Monsieur Bay was sent to the kitchen of the village hall and returned with a paper plate of choucroute. Wilf sat patiently, an angelic smile etched onto his face, while it cooled down. A tongue rolling, paws curling combination of sauerkraut, sausages, boiled meats and potatoes. The look in his eyes said " this must be heaven ".

This morning he was up bright and early, keen to be out exploring. Left out of the gate, right past the war memorial and the church and onto the end of the village by the horses field. No need to direct him. He knows exactly where he wants to go. Today, it was a trip to the layby where the works department stores its gravel. Up and down he went like a mountain goat, climbing to the top of each two metre high pile and then triumphantly sliding down the other. So much energy,so much enthusiasm, so much fun. If only we didn't know about that little 55 millimetre by 63 millimetre growth . Still, there's no time for sadness . The extra days have brought equanimity and an understanding that these rule relaxed , choucroute filled days are simply the best.

Thanks again for all your kind support. I sometimes feel that there's an invisible world of well wishers following us down the lane - a watching pack of Labradors, Airedales, Boxers, Greyhounds, Scotties,PON's and all. Wilfs extended family.