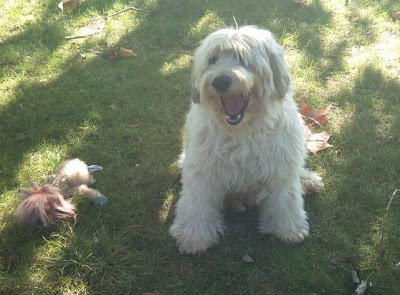 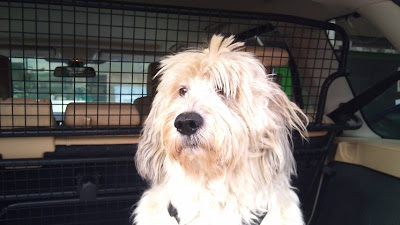 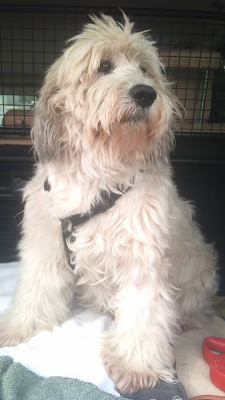 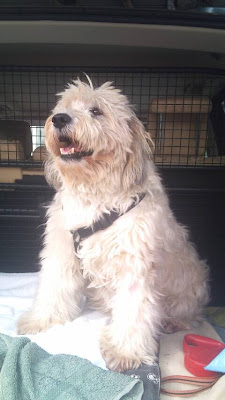 The reliable, always starts first time, little Volkswagen chose yesterday to show its age. For at least a year 'the font' has been pestering me to replace it . Faced with ever rising restoration bills on the rickety old farmhouse I've kept on putting it off. This morning the dashboard would light up but as for the rest, nothing. Not a peep. A call to the garage. After much pleading an agreement they would send a truck out.

Wilf watched , entranced, from the safety of the terrace as the car was winched onto the back of the lorry. I was just climbing into the cab when I caught the family fellow looking at me. A quick chat with the driver. " Yes, of course, no problem " and so, of we set. Driver, Wilf in the middle of the bench seat and me by the window. Careering along the country lanes, windows down, French ballads playing on the radio. At corners he would nestle into me and I'd tickle him behind the ears. Sometimes he'd look up as if to say ' why don't we get one of these ?'.

At the garage all worked stopped when we arrived. " A Volkswagen " exclaimed the chief mechanic - stating the obvious. " Don't see many of these ". In the land of Renaults, Citroens and Peugeots, automotive esoterica takes mundane forms. While the garagistes set to work , muttering to themselves about the idiocy of buying foreign, Wilf and yours truly explored the car park. Ranks and ranks of neatly parked cars and trucks. Wilfs eyes sparkled. So many tyres, so little time. Thank heavens for perfect aim.

Fewer walks yesterday. More sleep. The intensity still there. This morning down to the cafe for coffee, croissant and bowl of water. Nose and paws peeping out from under the table. 'Bonjour Wilfee' and a tousle from the peroxide waitress. Back home to find that the plumbers van has joined the two others in the driveway. The plumbers brought Jaffa Cakes. News travels fast.