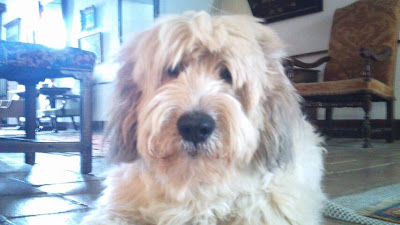 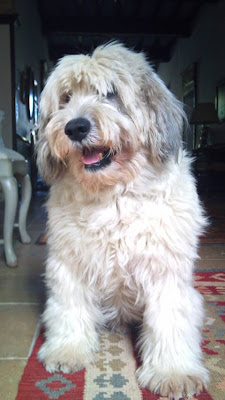 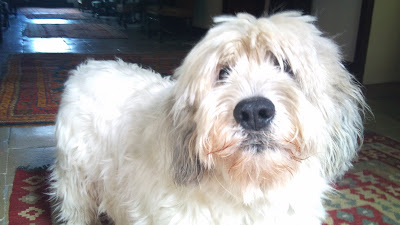 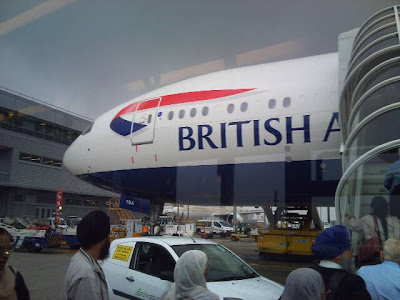 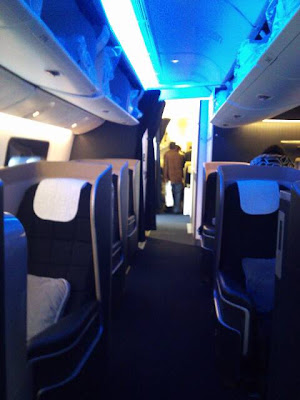 Two o'clock on Saturday morning and while the rest of the world was heading into Delhi for the opening ceremony of the Commonwealth Games yours truly was heading in the opposite direction. British Airways were very proud of the brand new Boeing 777 they were operating on the route - it was so new it had an engineer from Boeing onboard to deal with any snafus. The redesigned interiors are just a tad too blue for my liking. Blue carpets, blue seats, blue window blinds and blue lighting. As I was wearing the perfect camouflage costume of blue shirt and blue suit there was a real danger that the drinks trolley would pass the invisible passenger by. There again what do I know about designing aircraft interiors? This is a man who thought those bright orange seats at the back of a Delta L-1011 were the height of fashion. Tartan would be a prominent feature on any Angus Air cabin. Tartan and dog bowls.

This is the first time 'the font' and Wilf have been left on their own for more than one night since last years unpleasantness. 'The font' was just fine but Wilf seems to have decided around night three that I'd gone off to join his little brother in that place you don't come back from. Not even the expedient of a conversation on the cell phone would shake him out of his torpor. He is now acting like a cojoined twin determined not to let the lost sheep out of his sight. The PON ' wheresoever thou goest I shall follow too ' stare is much in evidence.