The cloned men of Koln. 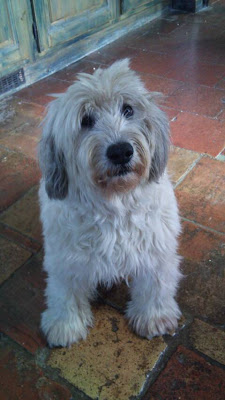 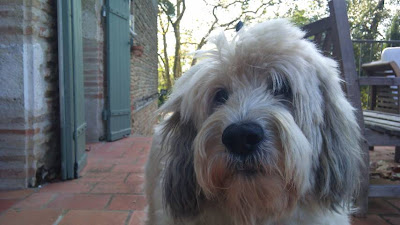 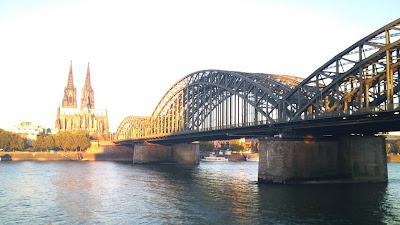 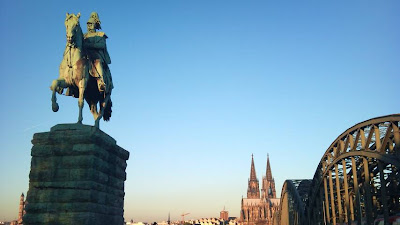 A new Cortisone side effect. Sleep walking. 1.30 in the morning and Wilf has wandered into the bathroom - a strict 'no go' area. He's found sitting in the middle of the floor looking mightily confused. " Blimey ! How did I get here ? " Taken downstairs to get some fresh air he stares at the open door in amazement . " Me ? - Outside ? - In the dark ? - You must be mad " . Another subtle hint that our old family fellow is changing by the day.

Yours truly was in Koln talking to the directors of a large American company. 23 of them. All square jawed, identical and for all I know interchangeable. The sort of wild night where my grey suit marked me out as a rebel amidst the corporate American blue. In pre-dinner small talk I looked out of the window across the Rhine to the cathedral. The Chairman seemed less than interested when I pointed out that the hotel, and the ugly Lufthansa data processing centre next door, were built on the site of a Roman fortress. Davitia - the home of the XXII legion and at one time civilisations farthest outpost. From the monosylabic response I gathered this was not my best conversational gambit. Perhaps we were still deep in barbarian territory.

Wilf was waiting in the arrivals hall at the airport . The French are on strike again . As a result the terminal was unusually quiet. Only foreign carriers who had taken off with enough fuel for the return journey were operating. A military honour guard was standing waiting for some dignitary from the near east who had drawn up in his personal 747. Our family fellow soon spied 30 pairs of freshly polished French Army boots standing, tree like, in a row. He set off towards them with a determined , tyre christening, gait . One Polish Lowland Sheepdog hastily apprehended before he could demonstrate the precision of his aim. Diplomatic incident averted.

Day ten. This gentle, shared journey can still generate gales of laughter. He's sleeping longer in the mornings now and do we detect the first hints of confusion ?