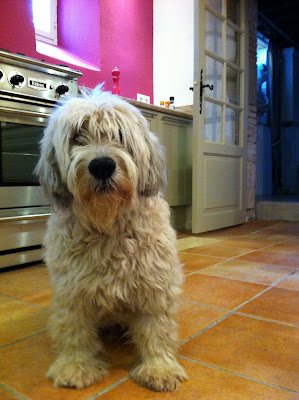 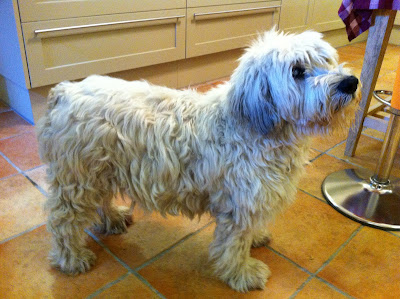 Wilf full of energy on his morning walk . He heads off to the far end of the village . A trip he's not wanted to make in at least four months . After a troubled night, this sudden burst of energy as unexpected as it is illogical . En route he passes Brunhilda sitting by the gate house of the chateau . She barks but he's far too busy ploughing , head down , along the grass verges to do anything more than look up briefly . It has rained during the night , the embedded wayside scents now maturing like fine , canine , wine .

Home to be told by the tall painter that he has found a colony ( nest ?) of baby bats behind the end shutter on the side of the house facing the church. They are a protected species and the volets can't be touched until they mature . Having had a house with twenty three green shutters and one grey one , we will now have a house of twenty three grey shutters and one green one . Plus ca change .
The family fellow spends the afternoon in the kitchen with ' the font '. As the roti de veau farci au chevre frais et la coriandre is prepared he enters his angelic mode . This entails sitting still while occasionally licking his nose , noisily. Very noisily . A reminder to anyone interested that he's still there. PON motto of the day : " Greed grabs , gratitude receives "
Posted by Angus at Friday, June 17, 2011