Poulet Antiboise and a dog with a chimp on his back 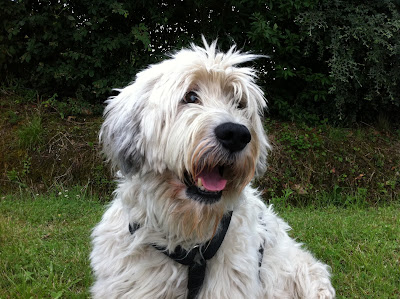 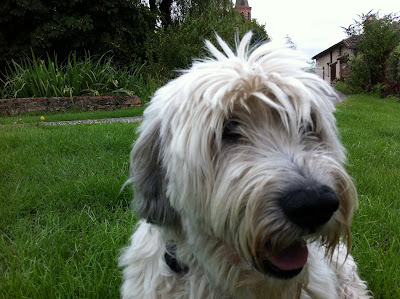 Six thirty in the morning and we're down at the cafe in the market square . Twenty two degrees already. Forty degrees forecast for later today . Wonderful drying weather for the still sodden downstairs bedroom and office . ' The font ' liberates the food section of the British Saturday paper ( it arrives here a day late ). A recipe for Poulet Antiboise. One of those lost staples of French provincial cuisine. Olives, onions, chicken and thyme - best served lukewarm with a salad and good bread .
An interview on the papers inside pages with Jane Goodall , the anthropologist . ' Dogs and humans have forged a shared bond of understanding since man and wolf first joined forces but chimps also seem to get on well with canines '. She tells a true story about a chimp sold as a pet in the Congo who bonds with a dog that carries him everywhere on its back . The sort of gentle , unhurried prose that grabs you gently by the hand and refuses to let you go . Writing as an art form . While we read and chat, Wilf lies under the table listening . He's invisible bar a black nose and two large , fluffy , paws that peak out from beneath the table cloth .
Tonight the mid-summer bonfire in the village . Madame Bay and the ladies of the ' beautiful byeways ' committee are doing the catering . Goats cheese, anchovy, courgette and ground beef quiche the highlight of the menu . Lord preserve us ! The competing 'village fleuri ' folk have been working on the hanging baskets outside the salle des fetes . What the baskets lack in sophistication they more than make up for in orange , red and white , but mostly orange, cheeriness.
The frogs croak, the bees buzz . Another summer Sunday in deepest France profonde. Poulet Antiboise for lunch . Wilf dozes in the middle of the kitchen floor , his nose occasionally twitching . He's dreaming of chicken and thyme .
Posted by Angus at Sunday, June 26, 2011