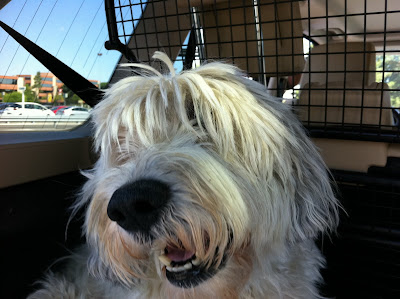 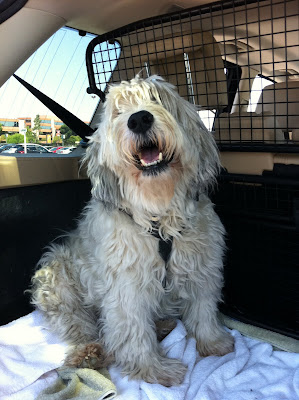 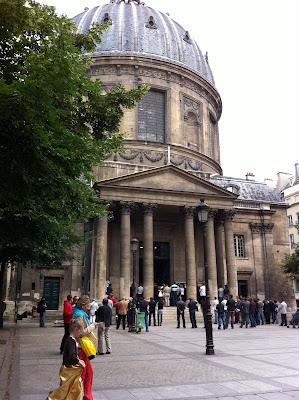 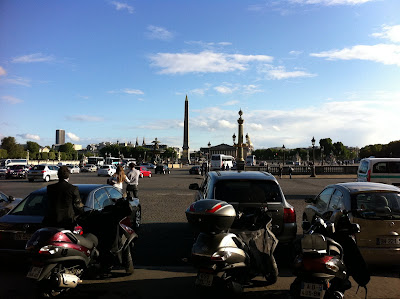 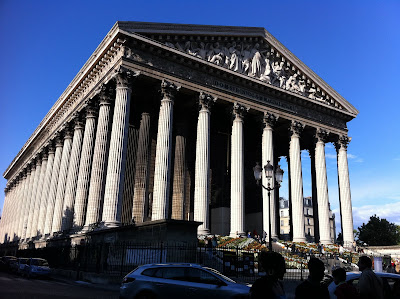 Off to Paris to give a Sunday lunchtime talk to an American company that makes aeroplanes . Those nice people at Air France , god bless them , cancel the early flight and consolidate it with the next flight two hours later . At the airport hurtle into a cab and make it to the front door of the hotel by the skin of my teeth . Opposite the hotel something you don't see very often : the Polish church has an overflow crowd that's spilling through the portico and onto the square outside .
Wilfs at the airport to meet me . He prefers to stay and wait in the back of the car these days , his wild tyre christening days a thing of the past . From a distance he looks like a vision of health but under all that shaggy fur he's continuing to lose weight. Down from 25 kilos to just under 18 . He really should have a good trim but he'd end up looking like a mere shadow of his former self . Into our ninth month and the subtle changes coming more frequently now. He's started to fall asleep in the most unlikely places , his usual spots forgotten or ignored . Some nights he's up every hour , other nights he'll snore away oblivious to everything . The first signs of nervousness . More worryingly meals being left half or three quarters eaten ; unheard of.
This morning on the village green a thousand happy pigeons pecking away . A trailer full of freshly harvested wheat has hit the speed bump scattering grain everywhere . It's ' the fonts ' birthday . Wilf ambles alongside us through the village scattering the pigeons as he goes . We look at him and laugh . The presence of the family fellow the best , if somewhat unexpected , birthday present . A testament to the restorative powers of sausages, coconut ice cream , and bisous . " For him in vain the envious seasons roll , who bears eternal summer in his soul " .
Posted by Angus at Monday, June 20, 2011