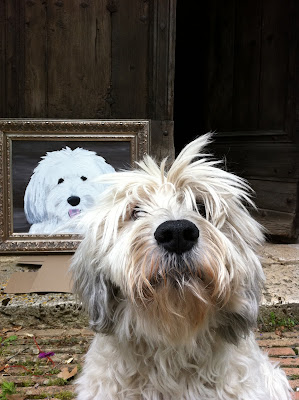 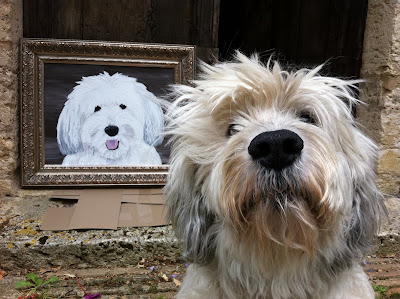 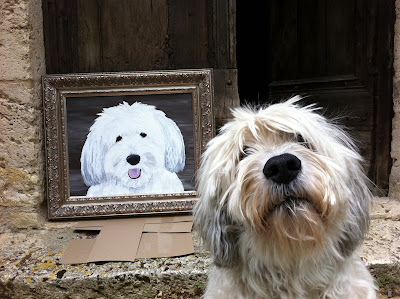 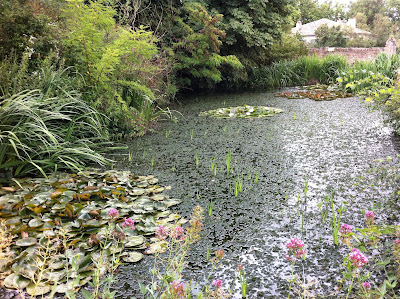 A damp , grey , overcast day , the temperature hovering in the mid teens . The frogs in the village pond shocked by this change of weather and uncharacteristically silent . They spend their day lined up against the gentle warmth of the low brick wall that skirts the footpath waiting until Wilf draws near before they hop with a gurgle and splash into the water. You have a feeling that they're just going through the paces . They clearly don't see the old fellow as much of a threat . He's lost nearly a third of his weight and now ambles slowly along , saddle backed , head down in the grass . Late in the afternoon a large van arrives . A parcel . Inside a wonderful picture of a bright eyed, bushy tailed Wilf . A reminder of earlier days . A gift from a talented , caring lady called Elizabeth in Alaska. Much laughter as we try to get Wilf to pose, unsuccessfully , in front of this image of his younger self.
Dog blog land . A place where people are still kind and an old fellows footsteps echo .
Posted by Angus at Saturday, June 11, 2011