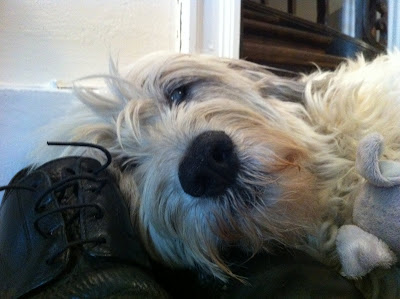 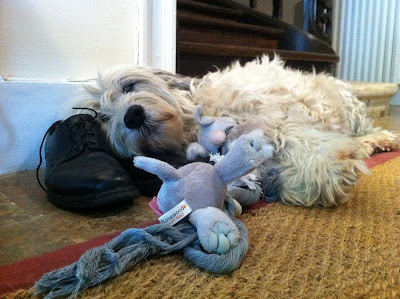 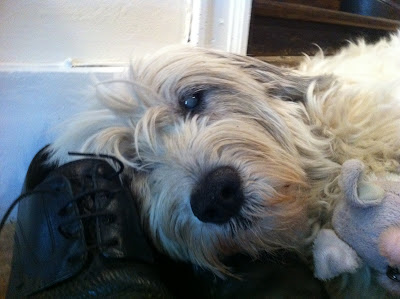 Wilf was in the vets surgery by eight in the morning . It's a horrid thing to say but I was delighted that the prim Parisienne wasn't working . A combination of jet lag , worry , and two sleepless nights might have made me less than diplomatic . Instead the family fellow was ushered straight into the surgery by Rachel , one of the senior partners . She tickled him under the chin and gave him a kiss on top of his head . The family fellow responded to this feminine attention by being on his very best behaviour . He was too busy having his male ego boosted to notice as she carefully cut the hair on his legs with a pair of scissors and then took a blood sample . A full hours worth of tests . Kidney functions fine . Cholesterol and liver readings off the scale . Could be stress , could be the cancer spreading , could be the cumulative effects of the cortisone , or a combination of all three . His arthritis more advanced . An injection to deal with the irritation that caused the manic paw biting. We're given her private cell phone number . " He seems fine now but give me a call if he starts to vomit or passes blood " .
He spends most of the day asleep. My gardening shoes acting as his pillow . A sure fire way to make sure that I don't wander off again without him knowing . Late at night he wanders upstairs and joins me in the den for the Toulouse - Montpellier rugby finals . He settles across my feet with a reassuring sigh . " Don't think I'm ready to hang up my boots just yet " . I laugh . It just goes to show that faith is all that dreamers need to see into the future .
Posted by Angus at Sunday, June 05, 2011