A bad year for melons. 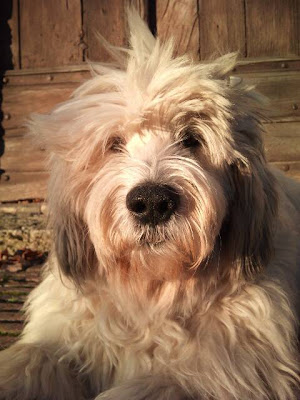 Another frigid start to the day. The ground covered in thick, glistening, hoar frost. Wilf who has become quite sniffy about going out in the cold surprised us by rushing delightedly out of the door. The sort of bone chilling morning when you're hoping for a short walk and your canine companion has his heart set on a long one. And a long one it was. Across the green, past the church and down to the lake. 'The font' and yours truly in fits of laughter as Wilf tried skating on the frozen puddles. Much truffle hound snorting as long hidden scents were discovered. Pungent delights.

Eleven thirty and the mayor came past for a restorative glass of champagne. He was feeling low. Another local farmer is giving up melon growing and going over to livestock rearing. It seems that in 2007 the farmers were getting 73 cents a kilo for their cantaloupes. In 2009 this had slumped to 54 cents and this year a disastrous 45 cents. ' Une annee catastrophique '. Incomers are oblivious to the changes in the landscape but for the old timers like the mayor it's a source of sadness. An hour and a half, and three glasses of Bollinger later, he seemed to have rediscovered his equilibrium.

After the mayor it was the turn of the curtain lady to show up. She rang the bell just as I was settling down to watch the rugby on television. Five nothing in her shoes and imbued with super human energy the curtain lady is a living nightmare. She always wants to ask my opinion about pleats or borders or linings. This is a mind numbing nightmare to someone whose knowledge of curtains can be summed up in the words 'Open or closed '.