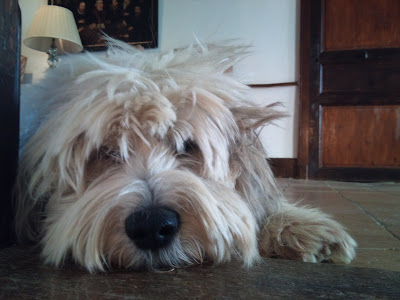 The first surgery after the holidays and the vets waiting room was as crowded as a snowed in airport departure lounge. Christmas in this part of France is clearly a dangerous time for animals.

After an hour and a half we finally get to see the prim Parisienne . For some reason she just doesn't 'click' with either Wilf or myself. The other two vets are simply wonderful. They understand the overriding importance to the male patient of bisous, sweet talk and tickles . By contrast the northern vet is all furrowed brow and stern remonstrance - not the ideal bedside manner for a nervous sheepdog or owner. Wilf tried to control his bladder but the stress proved to be too much for him. Another first. The old fellow looked so, so miserable.

A battery of blood tests. Diabetes confirmed. A 90% certainty that it's Cortisone induced. The insulin had run out on Christmas eve and a new batch won't be delivered until later today. A second night of bi-hourly pit stops in the garden.

I'm hoping that one of the other vets will be there this afternoon to give advice. Is the tumour growing again ? Should we consider stopping or reducing the Cortisone to see if that cures the diabetes ? How will the Cortisone and Insulin interact ? Should we change his diet to a diabetic variety ? For the first time we have the feeling that our old family friend might know there's something wrong.