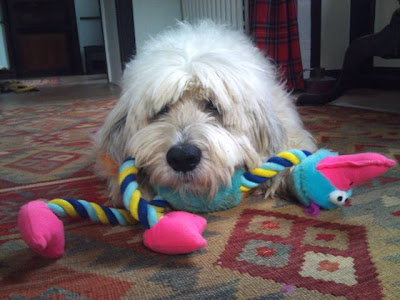 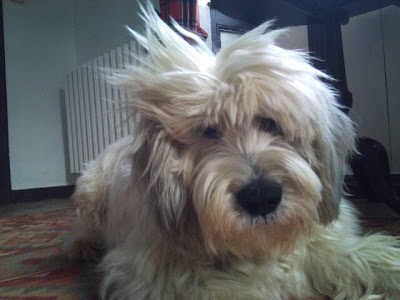 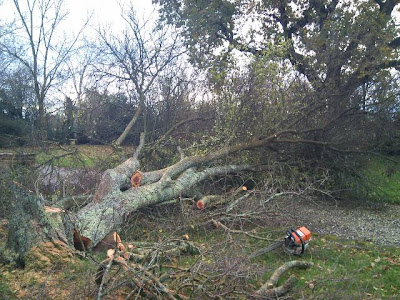 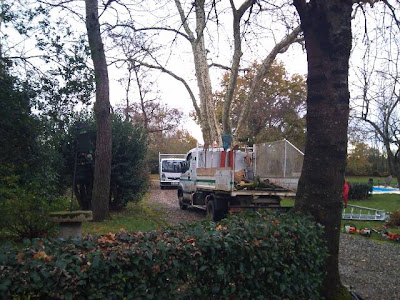 To the vets for the results of Wilfs tests. En route a quick detour to the cafe in the square for a coffee. A chance for an unbelieving 'font' to see the aluminium foil dress, fish nets tights and flashing 'Bon Noel' apron combination in all its glory. 'Amazing ?' I asked. " Alarming !" came the reply. 'The font' now convinced that the cafe is the local equivalent of one of those bars found next door to Greyhound bus depots in large American cities. While I'm choosing a croissant a gentlemen in a white cap , bedroom slippers and white socks offers to buy 'the font' a pastis. " Thank you but never before ten ".

The waiting room at the vets full. A sure sign that the clinical young veterinaire from Paris is not working. On the opposite side of the reception a French lady with blue rinsed hair cradling a blue rinse toy poodle in her lap. " Isn't it odd how some people end up looking like their dogs?" I ask . 'The font' looks across the room, then looks at Wilf, then looks at me. "She's probably thinking the very same thing" . We're both still laughing uproariously when it's our turn to go in.

A special word of thanks to Edward Calvin Kendall . Professor Kendall was awarded the Nobel prize for developing Cortisone exactly sixty years ago this week. The magic medication has had nothing short of a miraculous effect on Wilf, delaying the inevitable. The large tumours growth has slowed and the spread into the other organs has, for the moment, been halted. Apart from an opportunistic respiratory infection , the arthritis and some liver impairment he's as well as can be expected. The vet says cancer is like detecting un voleur dans la nuit - a thief in the night. Some additional medication and the next check-up scheduled for early in the New Year. " You'll be getting turkey and potatoes for Christmas " I say to Wilf as he's lifted into the back of the car. He gives me a look that says ' and don't forget the coconut ice cream with the pudding '.

Home to find the hyper-active gardeners chopping down trees and planting new ones. Wilf heads off for a celebratory tyre christening.