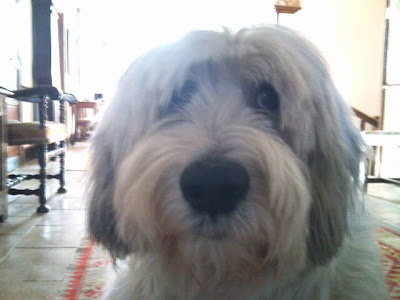 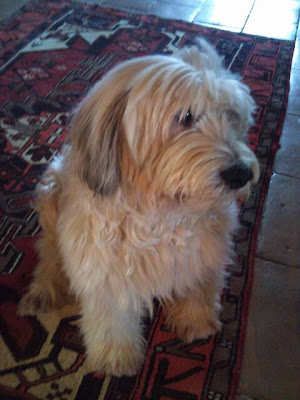 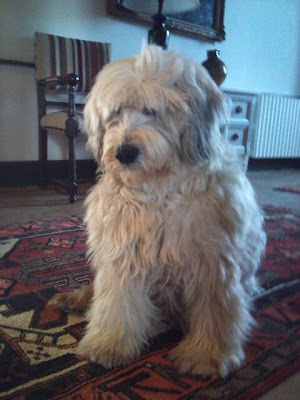 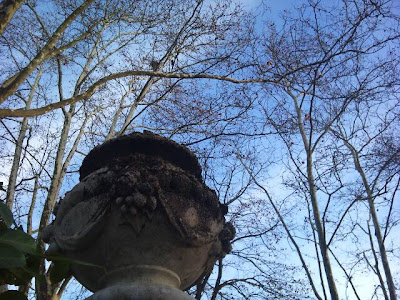 Madame Bay arrived at the front door, unexpectedly, to bid an emotional farewell. She, the long suffering Monsieur Bay and fifty or so other members of the local retired gendarmes club are off to New York for a week. For the journey Madame Bay was wearing a lime green headscarf that had been knotted at the front. Those old wartime posters of Rosie the riveter sprang to mind. " Don't worry M'Ongoose. It's only a week " she said wrapping her arms round me in a remarkably hearty, breath depriving embrace. Then, she repeated the " it's only a week " for reassuring good measure. Wilf had a little boy look on his face that seemed to say ' please tell me she's not going to plant one of those kisses on me '.

A slight dusting of snow yesterday. Wilf was delighted. Polish Lowland Sheepdog heaven. He followed me across the fields, head high into the wind. Every so often he would run on ahead and pounce on something invisible in the long grass, emerging with a smile on his face and a muzzle and nose covered in snow. I'd like to say that his hunting technique was lithe and graceful but that wouldn't be entirely true. It was however highly entertaining. Play mode firmly set.

When, after a long day out in the cold, an old dog sits in front of the fire, lays his head on your foot and falls gently asleep is that happiness, delight or joy ?