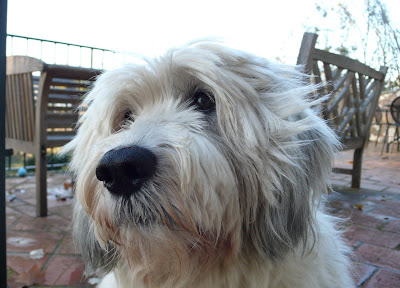 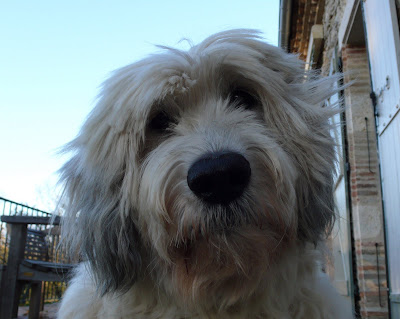 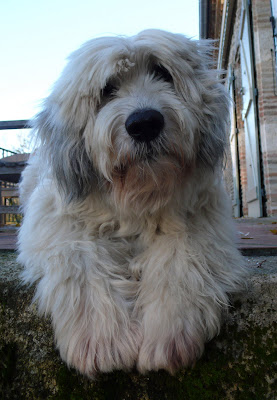 Wilf has settled into a simple daily routine. He ventures out when its light and he goes to bed when its dark. To fit in with this schedule our trip to the cafe is now delayed until the sun is high in the sky at eight thirty. This morning, the weather being warm, the two of us sat outside under the arcades alongside the parked motability scooters and white Peugeot vans.

Wilf settled down by the table while I went in to fetch a bowl of water, a coffee, and our shared croissant. A hearty chorus of ' Salut ' from the beer and absinthe crowd who were getting onto their third drink of the morning. Living proof of the generosity of the French pension system. Interestingly, this being France, the peroxide haired waitress was wearing thigh length boots, black fish net stockings, her flashing 'Bon Noel' apron, and what appeared to be a dress made out of aluminium foil. Sparkly, shiny, shimmering and seasonal. No wonder she wouldn't venture outside to serve us. " Blimey! That's not something you'd see in Kirkintilloch " said Wilf. 'Blimey! You're right ' I replied.

The world can be divided into two separate types of people. Those who are prepared for Christmas. And those who aren't. This family falls squarely in the second category. We were reminded of this by the sudden appearance of the village Christmas decoration. A large illuminated star has been assembled on the telegraph pole in the old farmers back garden. It must be all of fifteen feet high and hold about a thousand bulbs. One thing you can't do is ignore it. The heavenly presence casts its 10,000 watt glow far and wide but mostly directly into our drawing room. At midnight last night you could happily read by the light of the star - even with the curtains drawn tight.

Back down to the vets later today for the results of yesterdays tests.