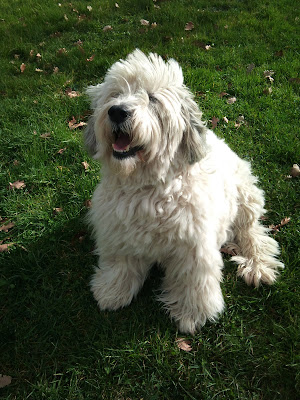 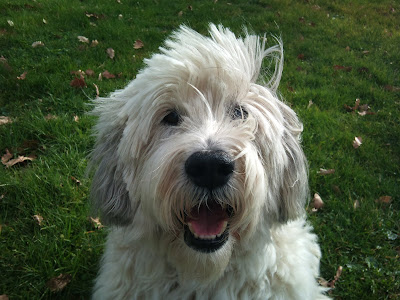 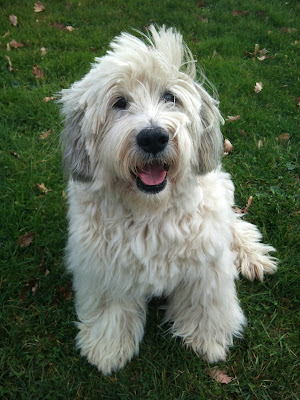 Off with Wilf to the vets. Annoyed to find it was the haughty young Parisienne who was on duty. An ' on the spot ' executive decision to return when one of the others is there. Wilf sat happily in the back of the car while the receptionist handed over a new box of syringes. Face saving political camouflage .

We may go back down again today. Maybe not. Wilf simply hates going. It's better to only take him to the surgery when it's really necessary. Over the last 24 hours the drinkings down, we're back to just one early morning pit stop and there have been no more accidents.

It's possible that he became overly stressed when I went away and this has caused the problem with the diabetes. The books all say that as a breed they are ' devoted to their families but wary of strangers '. That ain't the half of it. Being with their families is everything. Herding and guarding is hard wired into their systems. Younger dogs can cope with lost members of their flock and a change in routine .Older ones can't. This may not be diabetes management as much as old age stress treatment.

Four in the afternoon and the peace of the village is interrupted by the honking of horns. In fact it's the honking of a horn. The young replacement postman is driving, noisily, from house to house to alert us to the fact that there's going to be a major power cut . He had official letters but had ' mislaid ' them. " I' ll deliver them tomorrow " he cheerfully says. This morning we're waiting for the power to go off. When the lunchtime post comes we'll know the reason why. Life in a French village.