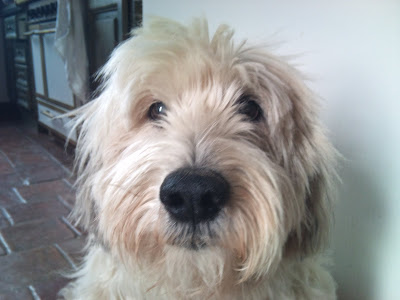 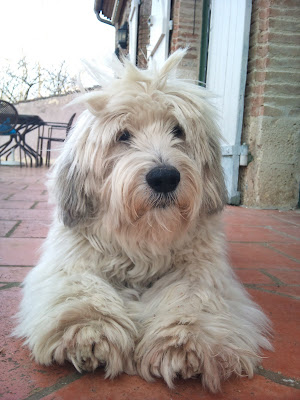 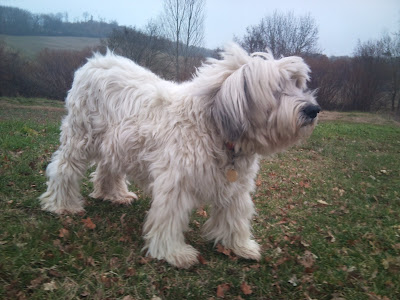 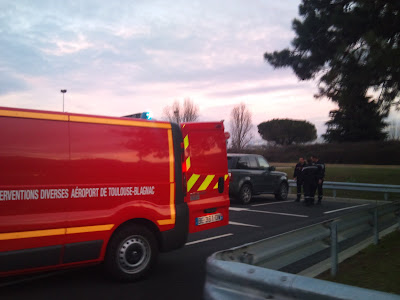 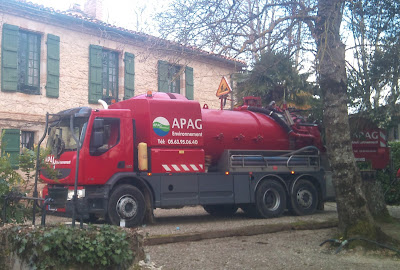 The plane back from London delayed by two and a half hours due to strong winds . Take off into the gale a decidedly sporty, engines at full throttle, affair. As we lurch, drunkenly, skywards a nervous American woman on the other side of the aisle suddenly shouts out loudly " This is the one ! ", then crosses herself three times. Everyone else looks, embarassedly, at their feet.

'The font' has resolved the recurring 'blockage' issue . Another huge truck arrives. After much digging of lateral trenches by Monsieur Risotto and his team the evacuation pipe from the ancient ' fosse septique ' is uncovered. The resulting release of pressure, in ' the fonts ' words is , ' spectacular '. That is all one really wants to know. The bottom part of the garden with its exciting odours is now out of bounds to Wilf.

Friday evening, the peak of the weekend rush hour. The large SUV decides to develop a fractured fuel pipe right in front of the airport arrivals hall. Amid gushing petrol, Wilf quickly lifted to safety. The offending vehicle then speedily driven to the remotest spot in the car park. Within seconds the efficient fire fighting team arrive to douse the leak in sand.

Wilf, wearing his best 'wot's going on 'ere then ' look saunters over to supervise . He soon finds himself to be the absolute centre of attention. No less than six firemen relaxedly chatting to him. Another reminder that France is different. Do all French fire engines carry a stash of biscuits ?