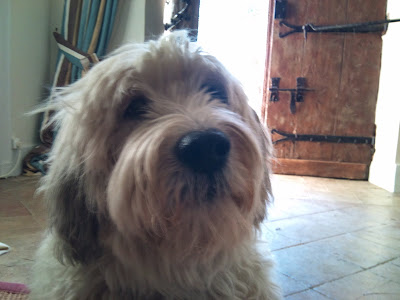 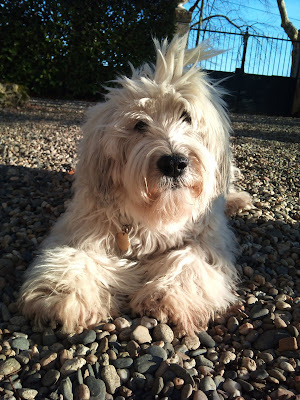 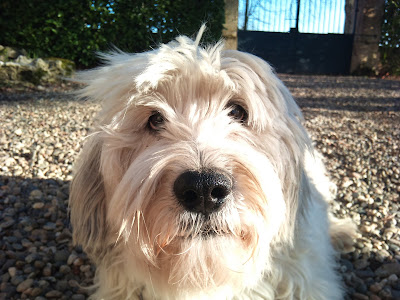 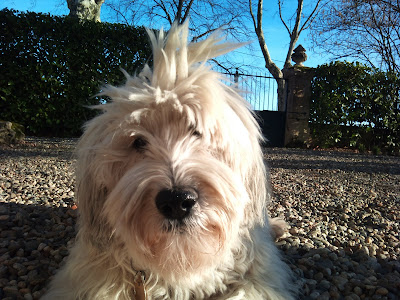 What a day. Everyone was here. The gutter repair man arrived at eight. I wished him a happy Christmas. The irony of my welcome went unnoticed. Ten minutes later the electrician showed up and then ten minutes after that the joiner. By the time Aude and Sylvie, the decorators, drove down the drive it was like Time Square on New Years Eve. The place was humming. At this rate the house might be habitable by Easter. A new visitor. Yvonne, a cropped haired, tobacco chewing lady from the womens cooperative. She has a cement mixer and is plastering the hole in the wall where the barbecue used to be. Wilf adopted his supervisor in chief role. Fifty five minutes of sleep under the palm tree followed by five minutes of barking. Repeat every hour, on the hour.

We met the old farmer on his way back from the cemetery. He goes there every day at noon to sit by his wifes grave and talk . 'Measuring up for his next move' as he puts it. He invited us in for a drink. While Wilf settled under the table our string vested neighbour produced a bottle of his home brewed eau de vie. Tooth jarringly sweet, gritty and with the kick of a mule.

Fuelled by this potent brew the old farmer soon started to recount his experiences in the resistance. I asked him if there was much hunger ( faim ) here during the war. He,however, thought I'd asked if there were many women ( femmes ). The response to my, misunderstood, question was akin to him sticking his pipe into the electrical socket while smoking it. " Women monsieur ! " he said sitting bolt upright in his rocking chair. " So many men were Prisoners of War. What was I to do ? Women have always loved me. I have a special gift ". Thankfully 'the font' came to collect Wilf for lunch before we were told what the special gift was.