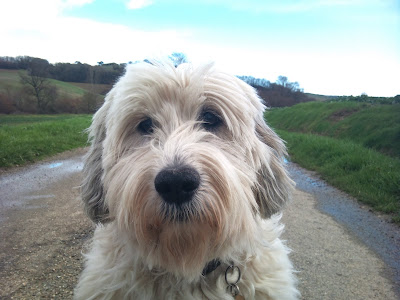 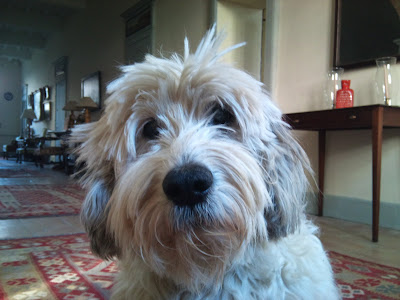 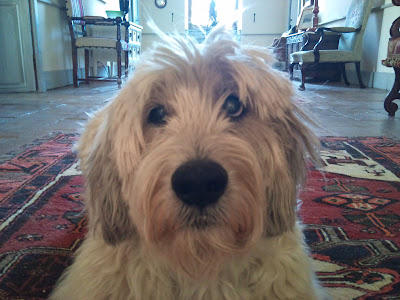 There's nothing like a shapely pair of legs to put a smile on a boys face. In Wilfs case the smile can be traced to the arrival in the village of a seven year old Springer Spaniel called Kelly. This morning as the family fellow and yours truly were walking past the gates of the chateau ' Kelleee ' came bounding out to say 'bonjour' . She's one of those enthusiastic, slightly ungainly, tongue lolling dogs that doesn't so much run as fall over her feet. It transpires that the old lady who lives in the cottage by the windmill has been to the rescue centre and found herself a new companion.

Wilf, who was engrossed with something unspeakable in the hedgerow, took some time to notice Kellys presence. But when he did he was star struck. The family troubador stood , frozen in admiration, as Kelly cartwheeled and piroueted around him. A rerun of the Polish farmboy meets sophisticated French ballerina script.

Sadly for Wilf, Kelly was soon off again . He tried to run after her down the lane but he doesn't have the turn of speed he used to. For a while the old fellow looked crestfallen but was soon heading purposefully home. A definite air of ' just let me take a quick nap and then we'll see who's the fastest ! '. He's now asleep by the door, dreaming of heaven only knows what. We'll wake him up at lunchtime. Perhaps Kelly will be there on his afternoon walk. As Wilf might say, ' It's not by the grey of the hair that one knows the age of the heart '.