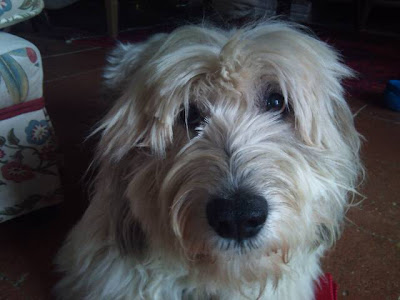 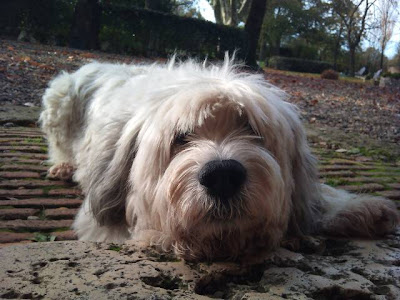 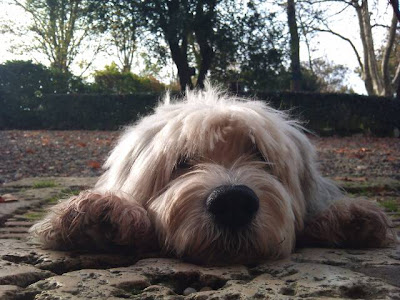 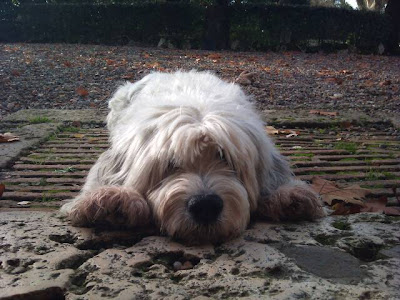 The early morning sky a startling mass of pinks, reds and russetts. Natures palet at its most vivid. The 'red sky in the morning' a sign of another storm working its way towards us across the snow clogged mountain passes from Spain. Outside the village church Wilf stopped,stock still, on his walk. There ahead of us a sight neither 'the font' nor I had ever seen before. A vertical rainbow. Somehow a columnar cloud rising two or three thousand feet in the air had managed to catch the dawn light and reflect it back with all the clear perfection of a prism. The old farmer saw us standing there and wandered over with Jerome the black labrador to look at the spectacle. Two minutes later, as the sun rose higher, it was gone.

Sunday morning, a good time to reflect on the week and take stock. Wilf soldiers on. He's not in any pain. His appetite remains robust - the effects of the vole or shrew long forgotten. Yet, in some imperceptible way the pace of life has gently but markedly slowed . Our walks are much shorter now . Much shorter . His goal the churchyard or the last street light at the edge of the village. Leisurely progress punctuated by lengthy pauses for just sniffing the air and staring distractedly along the lane. He's sleeping more. The spot on the kitchen floor by the oven his favoured haunt. Cake baking time his absolute nose twitching joy. Last night he didn't want to play - a first for this active fun loving boy. Instead he came over , lay on his side and held out his paw for me to hold. We've reached the stage on his journey where the greatest comfort is found in the simple reassurance of touch. Paw holding trust.