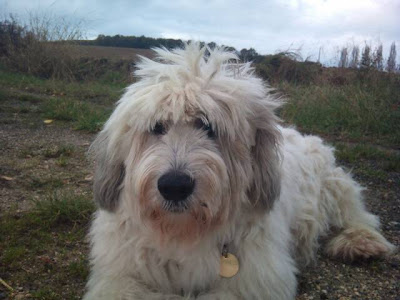 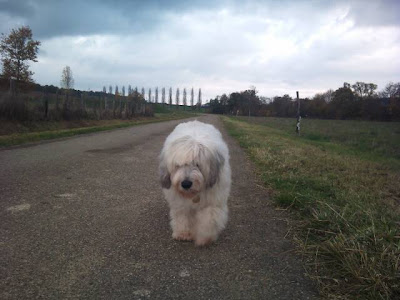 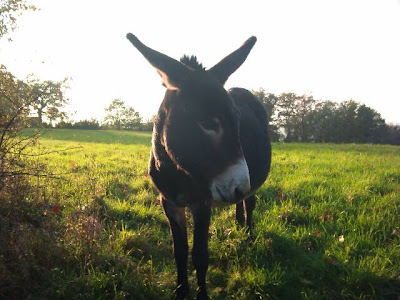 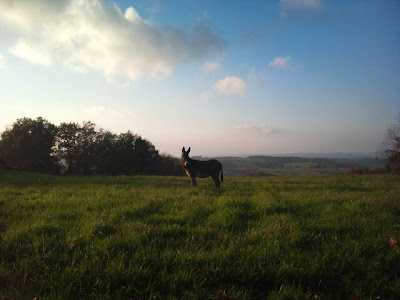 Long time readers of the blog will know that the little lane that runs past the front door of the rickety old farmhouse is part of the Chemin de St.Jacques. This is the route that tens of thousands of pilgrims follow to the Cathderal of Santiago de Compostela in northwestern Spain. It's said that the remains of the apostle Saint James are buried there.

Yesterday afternoon two Italian pilgrims, eye surgeons from Turin, dressed in their red pilgrimage shirts and wearing the traditional broad brimmed hats, stopped by the village church to fill their water bottles. They unsaddled their donkeys, settled down on the bench on the green for a rest, and within two minutes were blissfully and ignorantly asleep in the late afternoon sun . However, the donkeys were far from asleep and were soon off exploring.

The first we knew about their presence was when the ever watchful Wilf wandered outside into the garden for his afternoon constitutional . He was decidedly put out to find two large intruders munching their way across the flower beds. Wilf barked which had the immediate effect of getting the donkeys braying. It took a large bag of carrots and much gentle encouragement to unite pilgrims and their steeds. Our family fellow followed events from a respectful distance not quite sure what to expect from these large noisey visitors. Donkeys and eye surgeons reunited, he followed me back down the lane with a long suffering look on his face that said - " another crisis successfully dealt with by Wilf - time for a sausage ".

To the vet for the ten day check-up. 35 days. There are three vets in the practice. Two who cover Wilf with bisous and tickles and the third - a Parisienne - who is more 'clinical' in her approach. We got the third. Some stiffening of the hip and the first , tentative, signs that perhaps the liver is now being damaged. 'What about the confusion ?' I asked. "Oh, that's to be expected as he gets older " she replied. Then looking straight at me she said " We all get like that ".

Once outside I lifted Wilf tenderly into the back of the car. ' Did you hear that comment about getting older? ' I said to Wilf. "Women !" he replied, the pain of the Polish farmboys rejection by the French show girl obviously still smarting. We both headed off to the cafe in the square for a reviving coffee and choux pastry bun. Still no pain. Real cause for celebration. Our own little early, unexpected, private Thanksgiving.