Not a polar bear. 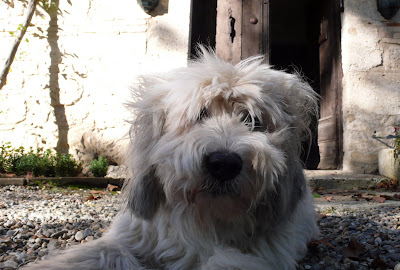 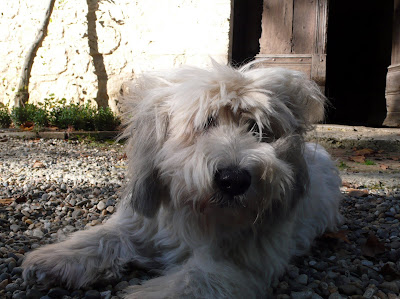 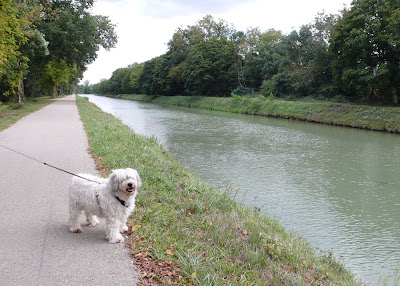 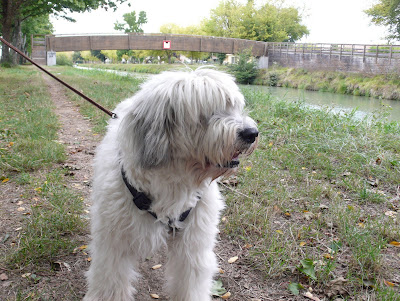 The first frost of the year. Wilf looked out of the front door, looked at the frost on the grass, then turned around and lay on his bed. ' I may look like a polar bear but I'm not '. It took the magic word 'croissant' to stir him from his warm, matressed comfort.

Each day now we're taking him somewhere new for the first walk of the day. A wave of fresh scents and sights seems to stimulate him and get him powering along . This morning he charged along the footpath of the Canal du Midi head down in a riot of fresh smells. A full twenty minutes of fun filled sniffing and snorting. A few joggers on the other side of the canal but not a single walker or dog on our side. To look at him you'd think he was the happiest, healthiest boy on the planet.

Back into the market town for a coffee and the promised croissant. Too cold to sit outside under the terrace so into the cafe proper. I dutifully shake hands and say 'bonjour' to the two barmen, the waitress, and all the early morning absinthe and beer drinkers. Formality a factor of French life even amongst our dipsomaniac friends. A loud chorus of 'bonjour Wilfeee' and much hair tousling as we come through the door. Add to the scene a bowl of water and half a croissant, torn gently into pieces by the peroxide waitress, and you have one very content family fellow.