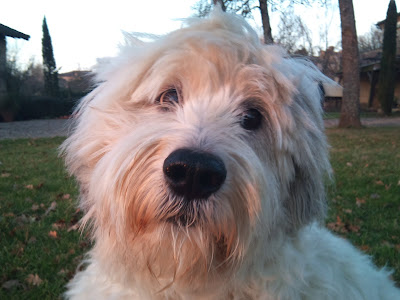 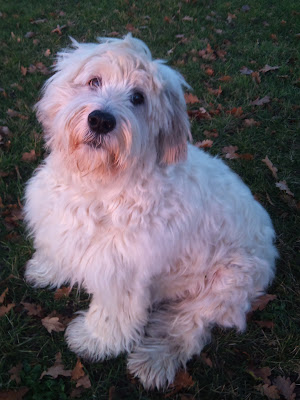 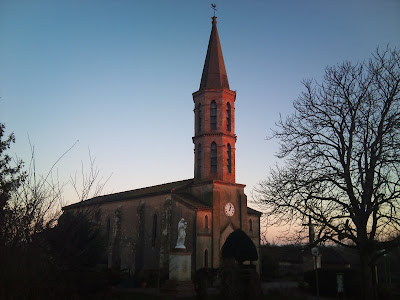 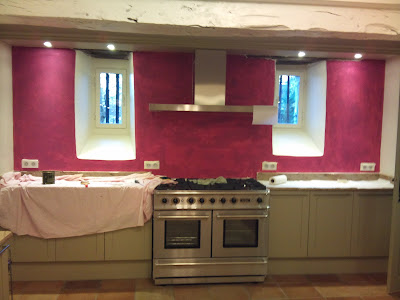 In the distance the clouds above the Pyrenees bubble up and up in an angry cauldron of purples and reds. The heat of the Maghreb clashing with Europes winter chill. Here, on our little ridge there are blue skies, a warming sun and the barest hint of a breeze. Perfect lazing weather for Wilf. Warmer than many a summers day in Scotland.

He dozes on the grass outside the church while the mayor and I clamber up into the belfry.
For the last three months the church clock which used to chime thirteen , on the hour, every hour, twice, has been frozen at three minutes past one. Sure enough, a dead pigeon has fallen into the mechanism . A mass of feathers and bones freezing the cogs. What's left of the carcass thirty five feet above the ground . Tantalisingly out of reach. The mayor looks at me. I look at him. Neither volunteers to venture out into the void. A job for the experts.

Wilfs early morning 'pit stop' time put to good use. A start on decorating the wall behind the cooker in the downstairs kitchen . At three in the morning the first coat looks wonderful. In the harsh light of day less so. The effect akin to a blender full of liquefied raspberries blotchily spread over the wall. 'Mischief by Little Greene Colours of England' it says on the can. The choice of a younger generation. Maybe the second coat will look better.

Time to review the week. Wilfs world becoming smaller. The routines less sure. He sleeps in different places. Barks if he finds himself alone. The chateau, pond, village sign and town hall marking the four corners of his universe. Two pit stops most nights. Last night four. For the very first time no interest in breakfast. An umistakeable downshift in pace. Like one of those old clapper board hotels on a quiet finger lake in upstate New York . The season nearly over. One by one the laughing vacationers go. The lights turned off. A place of happy, gentle memories .