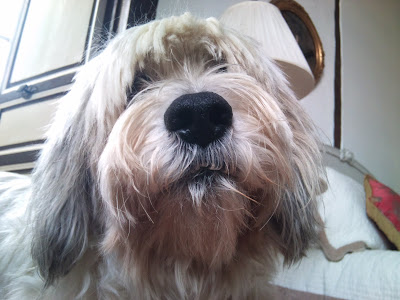 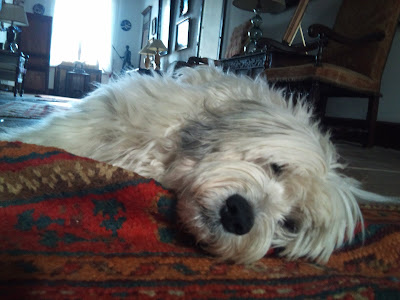 Two thirty in the morning . A winter wind rattling the shutters. Wilf is out in the garden for an unscheduled pit stop. It looks like we'll need to up the insulin dosage one more time. Through it all he remains so trusting and uncomplaining. An almost apologetic canine stoicism. ' I'm sorry to bother you but ...'

A Graham Greene quote I can't quite remember. A search in the downstairs library yields nothing. Something along the lines of ' You live until you're thirty and then you remember '. Can't decide whether it contains a hint of truth or is just a piece of trademark cynicism.

Strange what you think about at two thirty. Random memories of teaching at a summer camp in Scranton, Pa. suddenly escape the deep recesses of my mind. They've been kept padlocked there for thirty odd years. Just eighteen and put in charge of a small fleet of shiny silver canoes. Each had an indian name painted carefully in curlicew script on both bow and stern. The management keen to tell me that these were not just any canoes but Grumman canoes. It rained all the time so the aluminium armada remained largely dockbound while the unhappy campers spent their days tie dyeing . Arrived at a rain drenched Wilkes Barre from JFK on Allegheny airlines. What ever became of them? They seemed to have had an unfortunate habit of falling out of the sky. Like Eastern,TWA and PanAm, now part of history. Can Pennsylvania really be as wet as Scotland ?