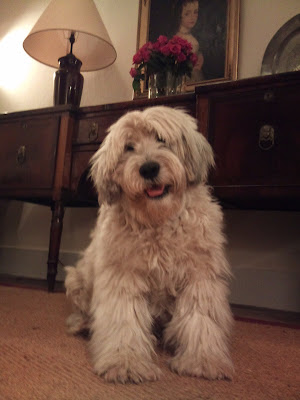 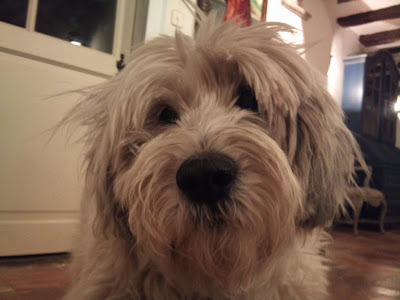 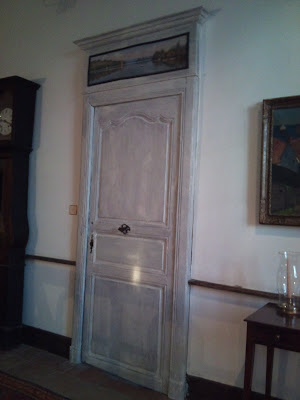 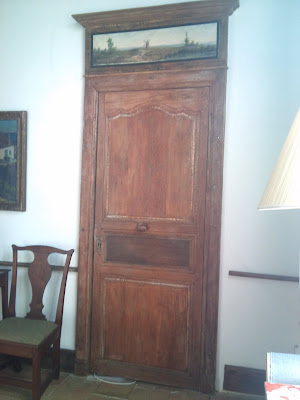 Outside, the landscape gardeners, the builder, and the two government septic tank men worked diligently away. Inside, Aude, the decaratrice, finished sanding down the old doors in the hallway. A slow, time consuming job. Under layer and layer of varnish an unusual, but not unattractive, combination of oak, elm and chesnut. For a while we toyed with the idea of leaving the woodwork bare but finally decided to go with the original grey limewash. It highlights the little eighteenth century paintings on the plinths and helps obscure the worst of the blemishes.

Odd how different generations have such contrasting views of how a house should look. A hundred and fifty years ago all the traces of grey limewash were painstakingly removed. Replaced by heavy, dark staining. Here we are reverting to the now fashionable original.

Wilf spent his day supervising. The septic tank excavations a particular favourite. He was finally ushered inside when 'the font' found a certain white fluffy dog getting up close and personal with an ever growing mound of malodorous sludge. Aude helped cushion the blow by sharing a biscuit with him. He settled down happily while she worked. A look on his face that said : " Silver linings aren't just discovered, they're created ".
Posted by Angus at Friday, January 28, 2011