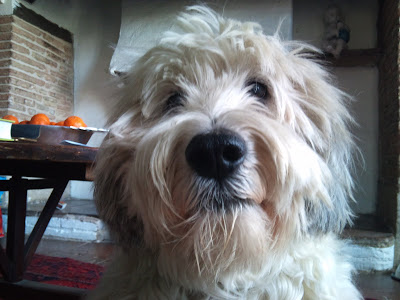 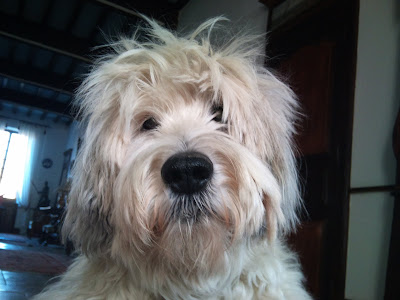 A great day for Wilf. Five white vans parked in the courtyard. Time for the serious business of sniffing wheel arches and christening tyres. Aude, the bib overall wearing decaratrice, arrived with a pack of biscuits. She received a lick. The other workers were greeted with a warning bark. The canine house rule : Biscuits = Acceptance. No biscuits = Disdain.

Few things on earth as mysterious as the plumbing system in the rickety old farmhouse. Pipes appear, then disappear into the ground, only to reappear again in improbable places far,far away. Faucets exist where no faucets should be. Water flows in enigmatic ways. The whole labyrinthine system a gurgling tribute to two and a half centuries of gallic improvisation. Logic and an understanding of the laws of gravity notable by their absence.

Two large, track suited, gentlemen arrived in the late morning to conduct a survey of the village septic tanks. Could this possibly be the worlds worst job ? They poked around in the garden for three hours, returning with the news that we have two ancient and hitherto unknown, fosse septique, by the front door. A plumbing enigma inside a pipework riddle.

They'll be back this morning for 'further explorations '. Wilf slept solidly from ten last night until six this morning. No early morning pit stops for him. A dog completely and delightedly exhausted by the discovery of fresh, highly pungent, odours . Heaven.