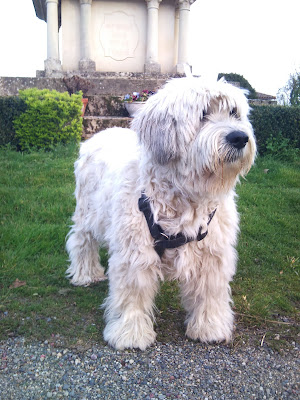 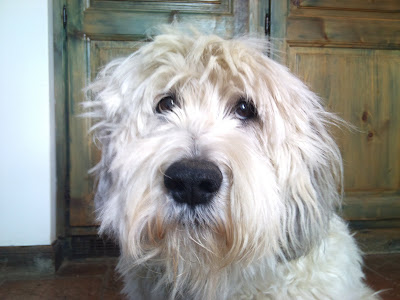 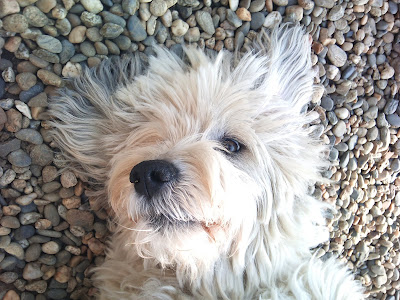 The gale blew and blew. At lunchtime a huge limb from one of the ancient oaks fell onto the roof of the barn. We returned from the market to find broken tiles and splintered joists littering the ground. This is the second time this has happened. Let's hope the marvellous old trees don't have to come down. Miraculously, the Land Rover that was parked in the barn avoided all the falling masonry and debris without sustaining as much as a scratch.

No less then eleven power outages last night. The irritating sort that cut the electricity for five minutes before restoring it for ten. Wilf was not happy. As a sign of displeasure he moved his sleeping position from the dressing room to the bedroom. The tried and tested " I'm not scared. I'm just here in case you need me " routine.

The cafe in the square is open again. Our resident absinthe drinking cohort out in force. They seem more than happy to have said goodbye to the competing establishments younger, hipper, recreational pharmaceutical crowd. Wilf content to sit under the table with his bowl of water and piece of croissant. An article in the morning paper says that Louisville, Kentucky is America's most haunted town. It goes on to explain that this is " because Kentucky was largely settled by Celts and Celts believe in ghosts ". Hmmm. That's scientific.

Home for 'oeufs a la pancetta et fromage de brebis sec' with ' cake au fromage de brebis et poires'. 'The font' bought far too much cheese at the market yesterday. Brebis is going to be writ large on the menu for the next few days. Some extra pancetta for Wilf who has strategically positioned himself in the middle of the kitchen floor.