Tongues in trees, sermons in stones. 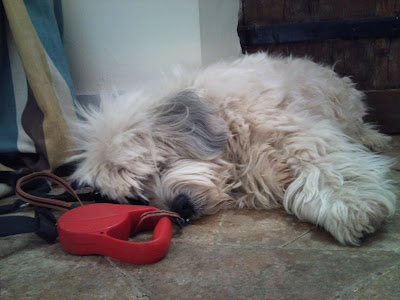 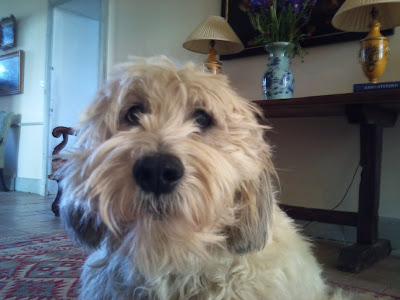 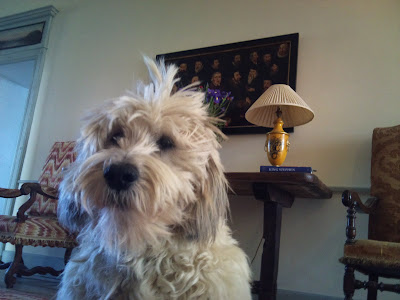 The hottest place in France. Again. 22 degrees here on top of the ridge, cloudless skies and the gentlest of breezes. As we go for our afternoon walk Wilf briefly comes face to face with Kelly. She is about to head off in the back of the old widows Renault to the Wednesday bingo session at the senior citizens club. " At the rescue centre they told me she was eight " says the widow looking at Kelly the hover dog whirring and whirling around Wilf in a typhoon of energy. ' Years or months ? ' I inquire.

Five months to the day since Wilf was diagnosed with the tumour. Ten to the day since Digby left us. Even now one brother without the other seems a little like half a comedy act. Laurel without Hardy. Beauty without the beast. Their way of saying goodbye as different as their characters. One fast and turbulent. The other slow and gentle. Both paths marked with laughter. Part of turning a house into a home.

Down to the stream with Wilf. Quail chicks scatter before him as he ploughs, rhinoceros like, through the grass. PON's one would have to say are not noted for their stealthiness. He drinks from the stream , paddles cautiously and then settles down to rest. He's soon on his back, completely carefree in the warmth. One of the most beautiful lines in the English language seems tailor made - " And this is our life, exempt from public haunt, finds tongues in trees, books in the running brooks, sermons in stones, and good in everything " .
Posted by Angus at Thursday, March 10, 2011