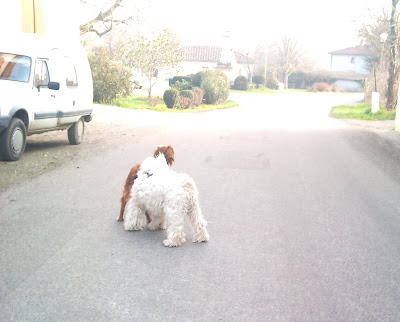 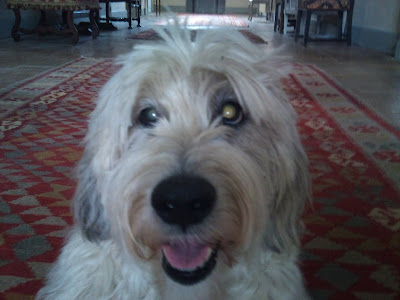 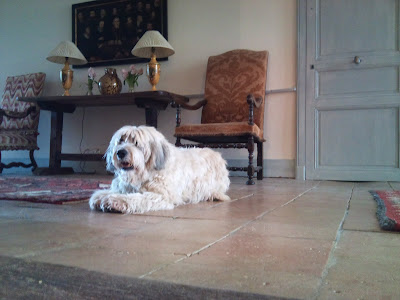 Out with Wilf for our early morning amble along the lane. After the recent sunshine a chilly, overcast start to the day. Everywhere around signs of spring bursting into full throated song. We'd crossed the village green, made a quick detour to the fire hydrant and just turned for home when a living bundle of playfulness burst out of the vegetable garden. Kelleeee. Within seconds she was bounding up to us - tongue lolling , ears flying , paws heading in all directions. A canine ballet of disorderly confusion.

Over the last 24 hours Wilf has gone completely blind. At first I was worried that this unexpected visitor might frighten him. But no. He stood stock still as Kelly danced and leapt around him. A moment or two for him to work out what was happening and then he was a dog transformed. Shoulders back, head high, nose in the air. All the aches and pains and mistiness forgotten.

Kelly is clearly not the sort of girl to dawdle. Just as Wilf was beginning to make her acquaintance , she was off again. A blur of exuberant brown fur hurtling, pell-mell, past the war memorial. The mobile phone camera barely had time to focus but managed to pick up the tail end of their all too brief encounter. Wilf made a few hurried steps after her but although the mind was willing ....

Home with the old fellow. I can tell he's feeling low. The eyes now completely cloudy. His process of adjusting to the total darkness just beginning. He follows me , carefully, into the office and lies with his head on my feet. A wistful sigh : " I had rather a fool make me merry, than experience make me sad ".