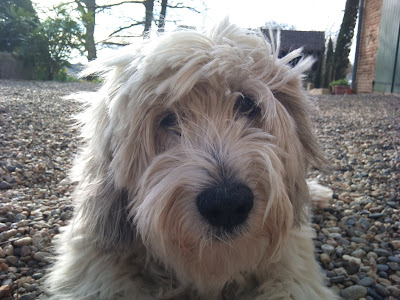 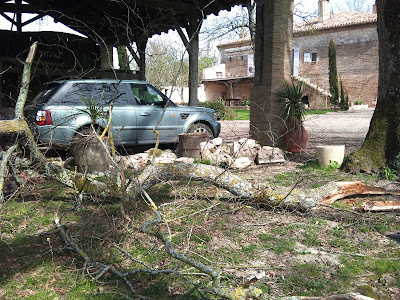 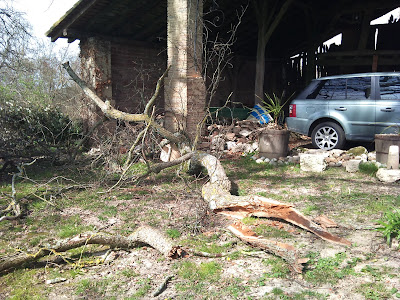 Tuesday afternoon and a white Peugeot van sweeps into the courtyard. Out steps Claude , ( he pronounces it Clod ), the trendy, thirty something tree surgeon. He's wearing a day-glo orange jump suit, a matching hard hat and what appears to be a parachute harness. As he greets me I can't help but notice that he has abnormally large, hairy, hands. It's a bit like a hand shake with a harris tweed covered dinner plate. Perhaps it's a useful simian trait for climbing trees. Wilf barks at Claude and carefully christens each of the vans tyres. The front offside one, no less than three times. No doubting who the boss is around here.

Claude looks at the fallen limb. He looks at the tree. He makes strange glottal noises - half hum, half word as he works. " They'll need to come down " he finally says, pointing to three branches brushing the roof of the barn. ' Can you do it now ?' I innocently ask as he clambers back into his van. " No way. It's too windy. I'll send you a quote . It's the woodpeckers " he cheerfully replies, heading off down the drive with a wave of the hand. After a year in the rickety old farmhouse I know that the word 'quote' is the French shorthand for ' this will be expensive '. Wilf looks at me. " Was his name clot or clod ? " he seems to say.