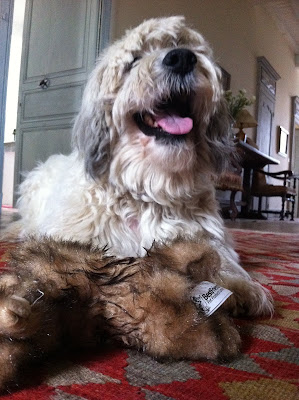 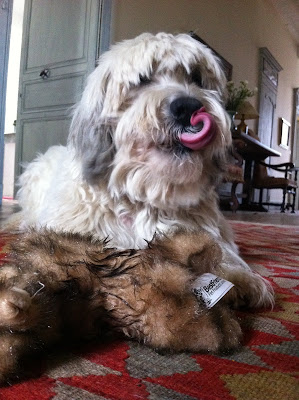 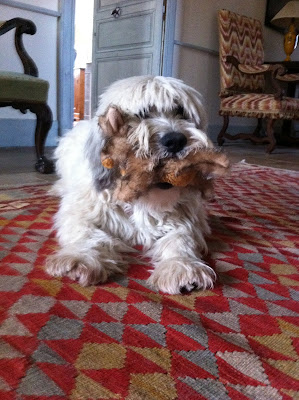 Open the shutters to see great billows of rain blowing in from the Bay of Biscay. Ocean rain. Grey and chill. It comes just in time to save the acanthus and most of the roses but not the lavender. From the chorus of croaks and quacks that greeted us it was difficult to say whether the frogs or the ducks were enjoying it more.

Trip to the fire hydrant completed, Wilf took the executive decision that this was a day to be spent in the kitchen. He communicated this to us by lying in the middle of the floor, by the ancient cooker, and ignoring all requests to move. A day for making La blanquette de lotte au safran de Juliette and crumble mangue, ananas et gingembre. He showed particular, lip smacking , interest in the quiche poireau-stilton. If the rolling tongue is anything to go by Stilton ranks way up there with coconut ice cream as Gods greatest gift to canine kind.

Three weeks on and he's still learning to cope with total blindness. Sometimes, after lunch, when he wakes from a deep, rabbit chasing, sleep and finds himself still in pitch darkness, he'll cry out. A trying to hide his fear ' where are you, come and get me' type of bawl - half bark, half howl. Sometimes his antics are amusing - a gentle game of dodgems with the furniture or a stubborn unwillingness to accept that a door isn't where he thinks it is. No wonder he's known as wilful Wilf. At other times it's sadder. A large white paw gently waving in mid-air, testing for obstacles in front of him. Coming for treats held in your hand - and missing. An uncharacteristic, startled, shying away from sudden, unfamiliar, noises. Through it all we maintain a constant banter of encouragement, praise, and reassurance. In the dark the greatest comfort is the friendly, familiar sound that says you're not alone. There's someone beside you . That's a simple, universal, wish shared by all sentient beings - human or otherwise.