A tantara of joy. 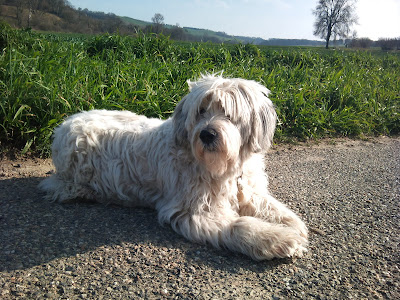 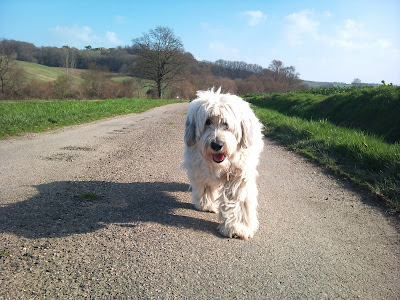 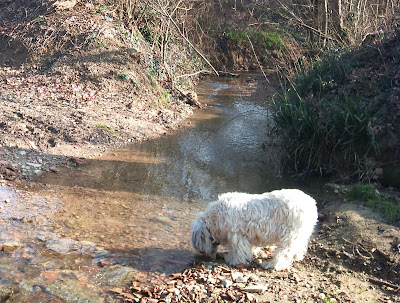 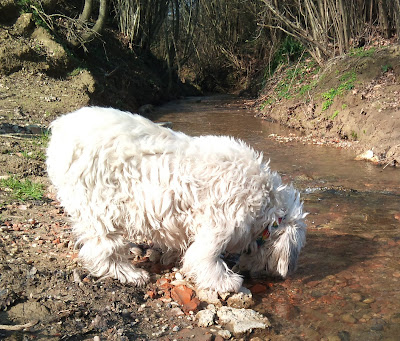 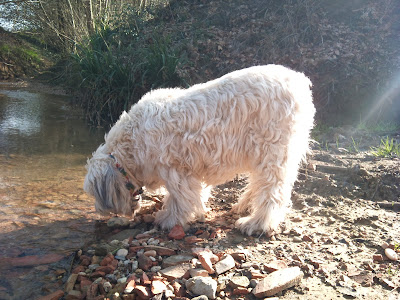 Five o'clock in the afternoon and a group of German pilgrims in matching red cagoules straggles through the village. Perhaps sixteen of them in total. Most walking in smiling, chattering pairs, but two at the end walking alone. Are the solitary ones deep in contemplative thought or have they argued with their colleagues ? Wilf rests his chin on the bar of the garden gate and listens to them go by. All, bar the two at the end, wave. For some reason Wilf doesn't bark . Something in their demeanour that says they're not a threat. Saintly pheromones perhaps ? As they leave the village the frogs in the pond burst into a croaking tantara of joy. Another hint of summer.

It's hot. Not warm but hot. With the sun setting Wilf follows me down the hill to the roman road. A shade dappled, well trodden, path. No surprises along this route to challenge our blind family fellow. Just the familiar scent of badger and deer. When we reach the stream he stops. First he stoops for a leisurely drink, then he slowly paddles along the waters edge, then finally he settles down on the bank for a refreshing nap. A scene so natural and peaceful it could almost be straight out of ' Wind in the Willows '. Another reassuring sign that he's coming to terms with his loss of vision.

Wilf sits in the garden with me while 'the font' heads off to the vets to find out the symptoms of Lens-Induced Uveitis. The head of practice on duty. The kindest, gentlest of professionals. His advice - " You'll know if he develops it ". As we set off on this new, unexplored, stretch of the journey it's so good to have an experienced, common sense, vet alongside. We'll worry about the things that are worth worrying about and forget the rest.