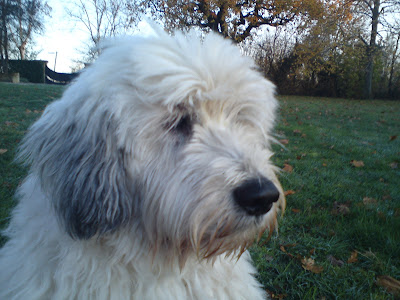 The joiner knew where we could find a real Christmas tree. Armed with this news the boyz joined me in the 4x4 and off we went carefully following his directions. After twenty minutes driving ever deeper into La France Profonde we arrived at an old farmhouse with a small plantation of trees to one side. After a brief conversation with the beret wearing owner (to ensure that we weren't Parisiens) a nine foot tree was cut down, attached to a wooden base, lashed to the top of the car and €20 handed over. While all this was going on Wilf and Digby enthusiastically explored the farmyard maintaining a watchful distance from the glowering geese. A triumphant return home.

After lunch, the boxes containing the ornaments were hauled up from storage and the process of decorating began. We soon found that many of them had been broken either in the move or in the robbery. Nonetheless, what was left sufficed to cover a fair portion of the tree - or more particularly the front half - the back half was left decidedly bare . We'll get in the car next fall and drive up to Poland to load up on new glass baubles so that the 2010 tree can be suitably dressed all round .

Somewhere between being cut down and arriving home the top third of the tree had developed a somewhat alarming 30 degree tilt. This tilt meant that the fairy on the top slumped at rather an alarming angle. 'The font' felt that far from looking angelic the little winged figure looked as though she'd been on the gin all day . The drunken fairy has been taken down while a suitable replacement is sought.

This morning we awoke to find a scene of devastation. Overnight the tree had fallen over knocking pictures off the wall, and ornaments from tables . For once Wilf and Digby weren't responsible - they had snored away contentedly all through the night outside the bedroom. I suspect that despite the best efforts of Rentokil our little furry friends may not have entirely disappeared.

'The font' has arranged for us to go out to lunch today with two retired French nuclear physicists who have left the bright lights of Paris to retire to the village. The thought of chatting with two nuclear physicists, in French, over lunch fills me with dread. Let's hope that we don't have to talk about physics - a conversation about trends in fusion research would be brief enough in English let alone a foreign language. When I commented that I'd rather have my teeth pulled rather than go out I was reminded that we must make every opportunity to settle into the community. As always there is a silver lining, 'the font' has booked us into a restaurant that has a rather interesting wine list so I've volunteered to drive us there if 'the font' drives us back. A good bottle of Chateau Figeac may work wonders for my scientific conversational skills.