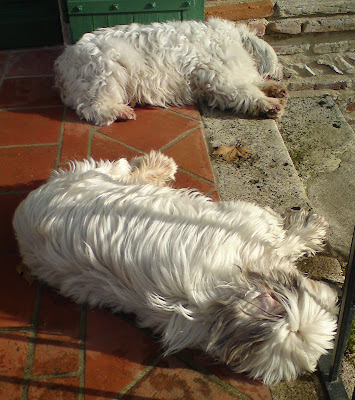 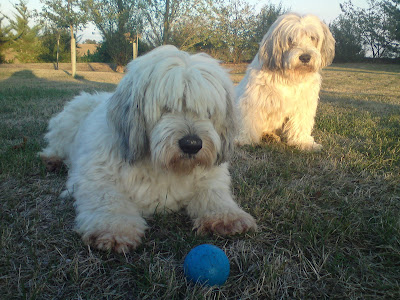 After a three hour delay last nights British Airways flight from London to Toulouse finally got to the front of the deicing queue and took off on its journey south. The Christmas angel was working overtime - shortly afterwards the airline cancelled all its domestic and European services as the snow closed in.
When the family arrived safely home in the small hours of the morning Wilf was transported back to puppyhood. In a split second he went through a process that took him from being happily asleep to being HAPPY! and very much awake . The suddenness of the transformation rendered him completely voiceless - not a single bark escaped his lips. His front quarters wanted to move forward but the rest of his body from the neck backwards was wagging from left to right at high speed in pure uncontained and uncontainable joy. The lack of coordination between front and back legs made motion in a straight line quite impossible and he was reduced to going round and round in circles desperately trying to determine who should be the first to get a lick. He lost eight years of age and aches .
Now that the family is reunited everything else falls into its proper perspective ie the singularly unimportant category.In terms of the deliveries that were expected the score card stands as follows.

This morning the happy,always smiling,plumber unexpectedly arrived. He brought with him a huge, jazzily coloured , blue and yellow panthecnicon and three of the local rugby team to deliver the replacement boiler. As he's here I've got him to replace the valves on the radiators that unhelpfully decided to stop functioning on Sunday . The surprises old houses spring on you. In the midst of all this activity the florist appeared with two replacement garlands for the front gates. Some sort of Emmaus road experience seems to have taken place since our last meeting. The surliness of yesterday has been replaced by a host of smiles and a charming admission that the previous garlands weren't quite right.

'The font' has come across a marvellous little guide to 'Important dates in the history of France'. Under the entry for 6th June 1944 it informs us that 'the 2nd French division under General Leclerc disembarked with its associated allies ( the Americans,Canadians and English) on the beaches of Normandy'. I guess it's all in the emphasis.